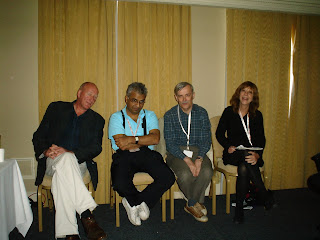 For me, the final act of the hugely enjoyable Crimefest 2010 was, as last year, the Criminal Mastermind quiz. The organisers of Crimefest kindly gave me a free pass to the convention on the condition that I returned to ‘defend the title’ that I won last year. My fellow contestants were Peter Guttridge, Ali Karim and Cara Black, and the quizmaster was Maxim Jakubowski.

The format of Criminal Mastermind follows closely the format of the TV show. You have two minutes each on your chosen special subjects in round one, and two minutes on general crime fiction questions in round two. As with exams and crosswords, there is a bit of a knack to it, which is why it is always more difficult for American contestants who haven’t seen the programme. I’ve been involved with four Mastermind quizzes over the years, and each time I’ve appreciated the American contestants’ willingness to have a go at something unfamiliar – not an easy task, especially in that famously menacing black chair, with the lights dimmed and in front of a large audience. You can see us all twitching in the photo before the ordeal began!

The first Criminal Mastermind took place at the London Bouchercon in 1990 – that was where I first met Maxim – and the second at the Nottingham Bouchercon in 1995. I won in 1990, and was runner-up in Nottingham, where the contestants included that marvellous American writer, the late and much lamented Edward D. Hoch.

One alarming feature of the entire week-end was the number of people who came up to me and predicted that I would win. Their faith may have been gratifying, but I couldn't help feeling daunted. My chosen subject was the crime writing of Julian Symons, and various people asked if I had re-read his work in preparation. In fact, I didn’t re-read any of it, since surely nobody setting a quiz would ever plough through the whole body of work - you can have too much information! So I assumed I could get away with relying on my long-standing enthusiasm for one of the great British crime writers. Doing a quiz is a bit like doing an exam – you just have to stay calm and focused and not worry about the things you don’t know, of which - as in life - there are always far too many. Happily, it all worked out and I’ll be receiving an inscribed Bristol glass tankard by way of commemoration. But next year, I’ll be very happy to sit in the audience instead of in the dreaded black chair and watch others suffer!

Martin - I heard how well you did on MAstermind. I certainly wouldn't want to challenge you!! Congratulations on a well-deserved win.

That's wonderful. I would feel so nervous to have the questions thrown at me. Glad you did so well.

Rather you than me! If I have to be in an exam, I want to be the examiner. But I have also heard quite a bit about your skills in the black chair - another thing I would have loved to experience ´live´.