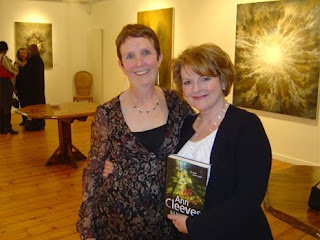 Life at the moment seems rather hectic and demanding, but there are a number of things that I'm looking forward to in the coming months. A real highlight in May is bound to be Crimefest in Bristol, which is always a fun event. Amongst other things, I'm hoping to get the chance to say hello to quite a number of fellow bloggers and readers of this blog.

I will be moderating a couple of panels, including a session on "forgotten authors", which has proved very popular in the past two years. I'm glad to say that two of my fellow panellists, Peter Guttridge and Adrian Magson, both have books coming out shortly, published by Severn House, whose crime list is expanding at the moment in a very impressive way.

Peter's book, The Last King of Brighton, is set in that fascinating resort which has been the setting for some marvellous works of crime fiction. Adrian's novel, Tracers, is his second thriller to feature former MI5 officer Harry Tate. Two more novels but I'm really keen to find time – somehow! – to read before long.

I'm also very much looking forward to the television series based on the books that Ann Cleeves writes featuring Vera Stanhope. I was sorry to miss out on a launch of Ann's latest mystery, which was attended by Brenda Blethyn, who will star as Vera Stanhope on the small screen. But thanks to Mike Stotter, I have permission to reproduce this photo of Brenda with Ann at the launch, a reminder of a show that a great many people are eagerly anticipating – including me.

Martin - You do have some goo d things ahead of you :-). I hope your panel goes very well. I'd like to see that Vera Stanhope series, too; we won't get it immediately where I live, but hopefully it'll be available at some point.

Dorte and I are both planning to be there Martin. Kerrie

I am also looking forward to your panels & meeting good blog friends, and I hope Ann´s film will be such a success that we get it in Denmark before I have forgotten who everybody was ;)

Kerrie and Dorte, it will be great to meet at last. Margot, hope our paths cross at some future date.