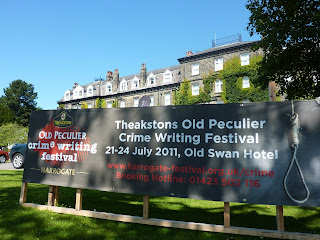 Crime festivals like Harrogate succeed or fail to a large extent through the quality of their panels and main events. But of course, quality is not entirely dependent on the fame of the panellists (and thank goodness for that!) Much depends on how the different people involved gell together.

I did feel that our 'legal eagles' panel was one where the different personalities clicked together. A good moderator like Peter McCormick helps. Another example was a panel called 'What Lies Beneath', on psychological crime fiction. The moderator was N.J. Cooper, a fine writer who is also supremely accomplished at putting people at their ease and creating a feelgood factor.

A different situation occurred when the moderator of a conversation between the American thriller writers Linwood Barclay and Lisa Gardner clearly found the task of public speaking a bit of a challenge. A tricky situation that anyone can sympathise with - it took me years to feel comfortable with speaking in public, so my heart went out to the person involved - and one that was happily redeemed by the evident good chemistry between the two authors. I've never read a Linwood Barclay book, but his wit and genial manner made me interested in his work.

Which leads me to another point. You can like a person and not necessarily like their books. But it's true, I think, that if one comes across a previously unfamiliar author at a convention and finds them personally appealing, one is more tempted to read their books. It may not be logical, but I think it happens a lot.

This is so true. I am helping to organise and will be on the panel at CSI Portsmouth on 5 November where crime fact meets crime fiction and we have some top British crime authors lined up to appear. I'm hoping that we all 'gel' and provide the audience with great entertainment. We have a professional moderator, an experienced broadcast journalist and radio station director and that helps. Having been on TV with you Martin!I'm hoping that one day we will be on a panel together. I enjoy reading your blog.

I hope so, too, Pauline! Many thanks. Best of luck with your panel.

One of the reasons I enjoyed CrimeFest so much (and have signed up for next year already) was being introduced to the work of so many writers I hadn't come across before. I took books by Steve Mosby and MR Hall away on holiday as a result, and enjoyed them so much I carried them all the way back again (I usually leave a trail of books behind me). And I still have lots more to enjoy.

Hi Janet, it will be good to see you again at Bristol. Any chance you can be tempted to St Hilda's next month? It is a great weekend.

Sadly I'm committed from now until November with my OU course (the history of film and television). Editing the novel has been put aside and no jollies until then. Hope to do both CrimeFest and Harrogate next year, though. Look forward to reading your St Hilda's report.