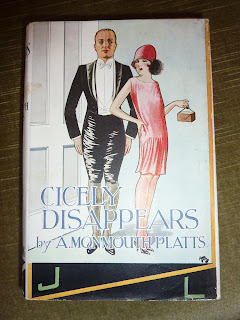 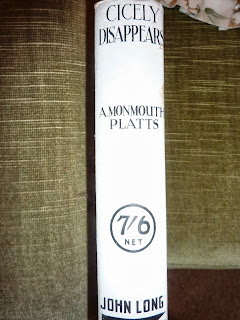 Today's Forgotten Book is one that I'm fairly confident few readers of this blog will have encountered. What's more, it was written by one of the finest novelists of the Golden Age. It's a fabulous rarity,conceivably the most sought-after of all Golden Age mysteries, and I was lucky enough to be loaned a dust jacketed copy in superb condition. I've no idea how much it was worth, but quite a bit, and you can be sure I took good care of it before returning it to its owner.And for good measure, it is a novel with a curious history. What's not to like? Well.....

The book is Cicely Disappears, and the author is A.Monmouth Platts. Now, if that name is unfamiliar to you, I should add that it's a pseudonym, composed of the names of two houses owned by Anthony Berkeley Cox, whose much better known pen-names were Anthony Berkeley and Francis Iles. Regular readers of this blog will be well aware that I'm a fan of Berkeley-Iles. He really was an interesting writer.

This particular story began life as a serialisation published by The Daily Mirror, of all newspapers,under the by-line of A.B. Cox. The Mirror ran a competition with prizes for those who guessed the solution correctly.The story was at that stage called The Wintringham Mystery, and Tony Medawar, a great researcher into the Golden Age, published a piece in CADS some time ago explaining that Agatha Christie's husband Archie was one of the runners-up. Did Agatha enter the competition under Archie's name, I wonder?

Berkeley made some changes to the story, and published it as a novel under his new pen-name a year later. So, what of the story? It's a book of legendary rarity, but I am afraid I think this is a case where obscurity is deserved. Really, the changes to the story are largely padding, and the mystery of Cicely's fate is dragged out in a way that tempts one to skip to the end. I'm so glad I have had the chance to satisfy my curiosity by reading this particular forgotten novel, but I'm afraid the final verdict is that those who are less fortunate are not really missing out. The books that appeared under the Berkeley and Iles names are infiinitely better.

Nice to see!! After some 35 years in the secondhand book trade I have never come across this title despite handling millions of crime fiction titles. The mystery is WHY it is so elusive. John Long titles (apart from the ubiquitous Edgar Wallace books) should be no more scarce than other smaller publishers of that time such as Skeffington, Grayson and Bles - but they are. And this title in particular published, one assumes, in an edition of some thousands should be more common than the present scarcity implies.

How interesting! And I love the cover. Wintringham rang a bell with me, but I think that's because Josephine Bell had a detective of that name... so I'm pretty sure that, like most of your readers, I had never heard of it. Fascinating piece though, and leaving us feeling that we don't have to try too hard to find it.

Amazing! I saw the photo and the odd name and imemdiately knew who who were going to write about. Was that book loaned to you with the dust cover? That's some trusting friend. I would've removed the DJ and put it in storage while the book was out on loan. Last month I scored a rarity myself: COUPONS FOR DEATH by "Nicholas Brady" (aka John V. Turner, aka "David Hume") in the orginal DJ. I have a post about that coming soon.

Fascinating. I too have never come across a copy - though I've been trading for only about a third of the time Ralph has! And it is a lovely looking copy.

"A.Monmouth Platts. Now, if that name is unfamiliar to you, I should add that it's a pseudonym, composed of the names of two houses owned by Anthony Berkeley Cox"

He called a house "A"?
Not much imagination there.

What an interesting post, about a rare book. It seems as though Cicely has almost totally Disappeared - what a shame that it deserves to be a forgotten book. Now, I wonder if Barter Books has a copy ...

Hello.I'm a detective fan from China.I want to translate your "Forgotten Book" into Chinese,so that we can learn more knowledge about mystery fictions.May I?

Ralph, I agree, it's a mystery in itself.I wonder if, because Monmouth Platts was a 'new' name, the print run was smaller.

Clothes in Books, hello. Yes, it would be fascinating if JB took the name from Berkeley's serialisation, though I suppose it's unlikely. I can promise, you haven't missed much with this one.

Hello, John. Yes, I was trusted with the complete book and dj, which was quite a privilege. I look forward to learning about Coupons for Death.

Hello, Juxtabook, good to hear from you as always. I've no idea what the value of the book would be, but quite a lot, that's for sure.

Hi Margaret, all I can say is, if Barter have a copy, grab it! Though for the scarcity rather than the content. A great shop, by the way, I hope to return there next spring.

Hello, Craigie, thanks very much for your enquiry. I'm not sure whether you're referring to just this blog post or others as well. Would you like to email me, and we can discuss further?

Like you, I'm a fan of Berkeley, and I've never seen (or, that I recall, heard of this one). WorldCat shows only three holding libraries (all in the UK) for the Lane edition, but interestingly I find there was a recent publication of a Japanese translation:

Thanks, I'm fascinated by the idea of a Japanese translation, and more generally by the great (and I think increasing) interest in classic detective fiction in the Far East.

My 2021 Collins Crime Club reprint entitled The Wintringham Mystery by Anthony Berkeley came in the mail yesterday. Can't wait to read it. So glad this one was finally reprinted.