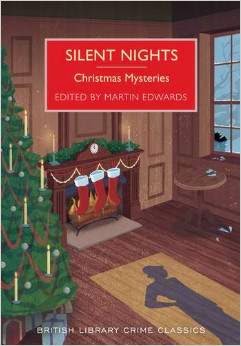 The British Library has just issued its catalogue for the second half of 2015, and it features half a dozen new Crime Classics,together with two Classic Thrillers. One of these books is an anthology that I've compiled, and I've contributed introductions to the other seven titles,so I cannot pretend to be impartial. That said, I'm very optimistic that fans of traditional mysteries and thrillers will find that at least one or two titles, if not more, whet their appetite.

Of the novels, I'd like to highlight Death of an Airman, which I've blogged about previously, and The Z Murders, by J. Jefferson Farjeon. They are both fascinatingly original. The Farjeon book is an early example of the serial killer mystery that I found extremely gripping. There are also two books written by Alan Melville in his younger days; he later become a well-known TV personality and humorist. His detective stories are light and witty, and have long been neglected.

Silent Nights is an anthology of Christmas mystery stories, the third of five collections that the British Library has commissioned me to compile. As usual, my aim has been to bring together a range of stories that show the very different ways in which inventive crime writers may tackle a particular theme. The contributors include Dorothy L. Sayers, but there are a couple of exceptionally obscure stories, including one by Farjeon that was kindly unearthed for me by Golden Age expert Monte Herridge when it emerged that not even the British Library had a copy. I've written an intro to the book, and also a piece preceding each story; my aim, however, has been to try to avoid repeating myself, so that there are items of fresh information even in relation to authors whom (as with Farjeon) have featured previously in the Crime Classics series.

Crime fans will be heartened to know that there's more to come from the British Library. Much,much more. This past week-end, I put the finishing touches to the fifth Classic Crimes anthology, and also completed two intros for excellent thrillers, as well as working on intros for two more rare and accomplished novels of psychological crime from the Thirties. And I gather that a deal may be in the offing that, if concluded, may lead to the publication of one of my all-time favourites. Can't wait...
.
Posted by Martin Edwards

I agree with you about finding other publishers to join BL in republishing other unjustly neglected GA authors, Martin. In the US, Otto Penzler's Mysterious Press and OpenRoad Media have been working together to republish - mostly as e-books - a range of classic US authors who have gone out of print, including Ellery Queen. It's heartening to see these books coming back, giving us another chance to discover and read some first-rate books.

Absolutely, Les. Among other presses, I'd also mention Crippen & Landru, Rue Morgue and Ramble House, all of whom have produced some splendid rarities in the past few years.

What are the titles being published in the Classic Thrillers range?

Thanks, Harriet.
The Classic Thrillers are Trouble on the Thames (Bridges) and The Traitor (Horler). Watch out for 2015, which will see more, and very different examples of the classic thriller.

I am delighted to see that the BL appears to have a serious long-term commitment to this series, Martin. In the past, I have noticed that when ‘commercial’ publishers revive long-lost classics, a dozen titles is as much as you can hope for before they lose interest and pull the plug. Congratulations to all involved and keep up the good work!

Thanks very much, John. You make a good point, and so I am pleased to tell you that publishing plans relating to the Crime Classics already extend to 2017.

The Classic Thrillers are Trouble on the Thames (Bridges) and The Traitor (Horler).

Sydney Horler? Oh bliss. Colin Watson's hatchet job on Horler in Snobbery with Violence inspired me to read the first of Horler's Tiger Standish thrillers. OK it's pretty rough round the edges but it's great fun.

Is there any chance of any of Berkeley's Gray's Norman Conquest thrillers being included in this series? I've only read one, Mr Mortimer Gets the Jitters, and it was a total hoot.