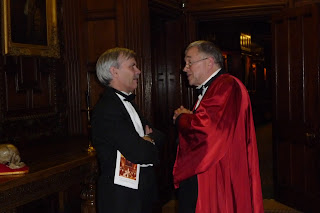 I've returned home after an exhilarating few days in London, with a number of highlights, including Saturday's superbly organised and hugely successful Bodies from the Library conference. More about that in a day or so, but today I'll focus on an item of news that I've kept under my hat for several months, but which became public knowledge over the week-end.

One of the events at the conference saw Simon Brett and I talking about the Detection Club. Simon has been President of the Club for fourteen years, and as he mentioned on Saturday, he made it clear a while ago that he was aiming to retire from office - an office which he has held with much distinction throughout that time. The plan is that he will retire at the next annual dinner of the Club, to be held in November. And the news he announced is that he will be succeeded by.... me.

To say that I am thrilled by this is an under-statement. As far as I'm concerned, in the course of an often very fortunate writing career, it really is the greatest highlight, given my undying enthusiasm for the history and heritage of the crime fiction genre, as well as for its present and its future. Back in February, when a number of members approached me with the suggestion that I become President, I was somewhat astonished as well as very flattered.

Once I had time to take it in, I was also extremely touched and grateful, and among several lovely things that have happened since the members made their decision is that the great Len Deighton, a member of the Club since 1969, generously took me out for a long and hugely enjoyable lunch in London, an occasion which I shall never forget.

Since the Club came into being in 1930, there have only been eight Presidents, one of whom was appointed as a co-President only:


When one looks at that list of very illustrious names, my pleasure is self-explanatory. Yes, you may think that quality control has slipped all of a sudden, but I couldn't possibly comment! My friends and fellow Club members have done me a great honour. Now my first aim is to try to avoid falling under a bus between now and mid-November...

(The photo shows Simon and me at a Detection Club dinner a while ago and was taken by Kate Charles the night she was initiated as a member of the Club.)

Selection by your peers has to be the greatest honour, Martin - anyone can win an election by throwing money and promises at gullible voters but I doubt that's how the Detection Club went about its business. Many congratulations (but I have to say that the thought of you and Simon having to wear a 'one size fits all' robe did make me giggle....)

Cripes Martin, this is indeed a BIG thing. What a blast! What an honour. You must be feeling so proud. Many, many congratulations and I wish you much success. This is wonderful. Well done. Awesome.

These are hugely fabulous and thoughtful people, and they have chosen well! No quality control problem here. I for one and very proud of you, keep up the good work.

That is brilliant news Martin, but totally well-deserved, Many congratulations.

Wonderful news - and, as others have already said, a well-deserved honor (sorry for the American spelling). Congratulations indeed!

That is absolutely thrilling, Martin! In fact,the thrill has reached me all the way across the Atlantic and the Continental United States. I can't imagine anyone more qualified or more suited to the task.

Congratulations, Martin! I actually got goose pimples when you said "they picked...me" , and I also thought, what a brilliant move on their part. It is a very well-deserved and well-earned honor for you. Just think the next Detection Club Presidents will be feeling thrilled to have his or her name added to the list of esteemed authors and one of them will be Martin Edwards! Well done!

Congratulations, Martin. A well-earned title. But... will you have time to attend to this wonderful blog?

Congratulations, Martin - I really can't think of anyone better than you for President!

As I was there at the announcement, I feel I should mention the huge round of applause that greeted the news in the auditorium. Congratulations, Martin.

I really do appreciate your kind remarks - thanks so much. Puzzle Doctor, I must say tha moment when Simon made the announcement will stay in my mind for a very long time. And Karabekirus, have no fear, the blog will continue just the same as before.

But who else could it have been after that book length tribute to the founding members of this august group of writers? :^D A hearty congratulations to you!

Many congratulations, Martin. Long may you reign! Marnie Riches

That's a heck of a list to have your name added to. Congratulations on deserved recognition.

It couldn't happen to a better writer or a nicer person. So thrilled for you, Martin. Gave me a little golden glow on your behalf. There is no greater tribute than to be recognised and praised by your peers.

By the way (while I'm here!) must say how wonderful a read The Golden Age Of Murder is. Trouble is, it is taking me an AGE to get through (not like me at all!) as I have to keep reeling away from the pages to digest, ponder, smile and be amazed by. Sometimes I can only read a single paragraph before having to walk away to think. Now, that is the sign of not only a great book, but also great insight, great writing and great brain food.

The conclusion is: read Martin Edwards at your peril. Your day will disappear and all that gardening, washing up and dog walking will be relegated to later. You have been warned!

Congratulations. – Good news, and following so closely to the publication of your fine book, The Golden Age of Murder.

Many, many congratulations Martin - you join an illustrious company. I'm really thrilled for you.

What an honour and what a well deserved honour too. I can't think of anyone else who combines your own skill as a writer with such scholarship and knowledge of the genre. Congratulations Martin!

Sorry I'm late to the party, Martin, but congratulations no less heartfelt for being tardy. What wonderful news. I'm so glad that your dedication, passion, hard work and talent are being rewarded in such a way, a way that I suspect means more to you than anything else ever could.Fantastic, it's made my day!