All the Fun of the Book Fairs 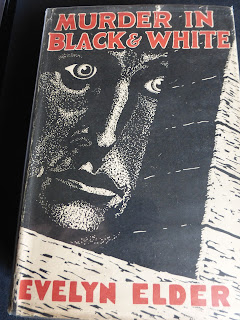 One of the sub-plots, so to speak, of The Golden Age of Murder concerns the stories that are evident, or implicit, in some of the inscriptions by authors in their Golden Age whodunits. This is a subject that has intrigued me for a number of years, and in the book,I've discussed inscriptions by Agatha Christie, Henry Wade, and others that I find appealing. But of course, it is rather hard to track down such books.

I succumbed to temptation, therefore, when down in London on Friday..For the first time,two major book fairs, one run by the PBFA, the other a major international event, were run in tandem, with a shuttle bus linking the two events. I met up with a couple of friends, including the doyen of Golden Age commentators, Barry Pike, and set about haunting the bookstalls.

There were many fascinating books on display. Some of them would have been totally irresistible had they been affordable. But I did pick up a number of titles. Most of these come from the collection of the late Bob Adey, who assembled many treasures over the course of about fifty years. I've never seen such a remarkable collection, and I'm glad that I've been able to acquire just a few of them. Among those that were out of reach,by the way, were two editions of the famously rare The Curious Mr Tarrant, by C. Daly King. One of them had an ownership signature of Ellery Queen - wow...

My haul was more modest, but I was very pleased with it nonetheless, and I did find some very interesting inscriptions. One example is to be found in a copy of Robert Player's first book, The Ingenious Mr Stone, and another in John Dickson Carr's Fire, Burn! - Carr often wrote lengthy inscriptions, and this is a good one, though not easy to read! The Evelyn Elder novel in the picture above is not inscribed, but it was such a lovely copy that I couldn't resist it, knowing that I'm never likely to see another.

I'll be talking more about the inscribed books on another occasion, but suffice to say that it was a thoroughly satisfying pair of events. And it was rounded off by most enjoyable dinner with Barry Pike and a notable collector, my friend and fellow employment lawyer Nigel Moss. Barry has, by the way, already written his talk on Allingham and Sayers for the Bodies from the Library conference on 20 June, and I'm sure fans of those two writers would love to hear it. Book now while a few tickets remain available - the event is expected to sell out.

That reminded me I had forgotten to book my bodies from the library ticket - now done.

I'm glad I didn't attend the book fairs, would have undoubtedly adversely impacted on my pension lump sum if I had encountered Bob's collection

Oh, you tease, you! Making us wait before telling us about the inscriptions.

See you there, Scott!

Marcia, you must allow me some fun!

I would've given anything to see some of those books from Bob Adey's collection. Hope they go to good homes where they will be read and treasured. I hate to think they'll end up in bookshops priced exorbitantly where they will remain on the shelves for years. Occasionally, I still come across books from the Adrian Goldstone collection priced very affordably. He had a personal bookplate he put in nearly every one of his books which is how I know they were his. He had a vast collection, too, and among them some very rare titles.

I wonder if any writer alive these days will have books thought of as collector items fifty years from now.

John, you would have loved it. I'll certainly treasure my purchases, but the collection as a whole is to be widely scattered. As for today's writers, signed copies are much commoner, but interesting inscriptions will, I think, remain collectible.