The Golden Age of Murder - time to reflect 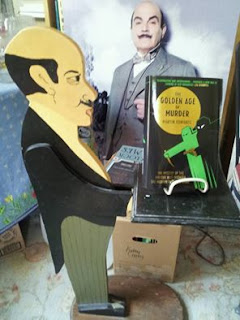 The past three months have been hectic, as The Golden Age of Murder has been published, and I've been running hither and thither to promote it, whilst not forgetting my other recent books, the anthologies Resorting to Murder and Truly Criminal. And now I've just received the fantastic news that the first edition hardback has almost sold out, and that the hardback edition is about to be reprinted.

I've been lucky with reviews over the years. Even for my legal books, believe it or not. But I've never had such an extensive and wonderful response to a book before. Take for instance the review in The Times by Marcel Berlins the other day, when the doyen of British crime critics set out his choice of summer reading. He said: "Few, if any , books about crime fiction have provided so much information and insight and, for the reader, so enjoyably...No other work mixes genre history, literary analysis and fascinating author biographies with such relish."

Wow! It really doesn't get any better than that for a writer, does it? I've been equally heartened by the many messages and emails I've received,about the book, quite literally from around the world, I've included extracts from the reviews on my website, and these have been extremely gratifying. Although the book is not a novel, I wrote it as a novelist, and poured a lot of myself into it. I'm glad that my enthusiasm for the Golden Age communicated itself.

I'm also grateful for the interest shown by fellow bloggers, and various other sites - including the BBC History site, Dead Good Reads, and Publishers' Weekly- which have published blog posts or articles of mine linked to the book's themes. Special thanks go to those novelists and leading crime fiction experts who commented on my manuscript prior to publication, and made it a better book. They are all friends with wise judgement,that I trust implicitly, and I'm very much in their debt. So take a bow: Peter Lovesey, Ruth Dudley Edwards, Ann Cleeves, Doug Greene, John Curran, Tom Schantz, Tony Medawar and Arthur Robinson.

The photo of "Poirot the Butler bearing Martin's book' is one I really enjoyed when I came across on Facebook, and I'm reproducing it courtesy of Kathy Harig of that terrific book store Mystery Loves Company - thanks again, Kathy! I'll continue, of course, to talk about The Golden Age of Murder on this blog and elsewhere. How could I resist? But before long I'll also be turning my attention to my next novel, The Dungeon House, which is due to be published in the UK and US in September.
.

I think the key was that it's a fun book, not dry at all. I mean, the sections dealing with the travails of Dorothy L. Sayers and Agatha Christie are not a laff riot, but you clearly love the books and feel a deep connection to the writers, and treated them honestly but with sympathy.

And the title index is a treasure for those of us looking to broaden our reading.

Congratulations Martin - so glad to see it all going so well!

Congratulations again, Martin. So glad it is getting recognized and I expect it will again when awards are handed out.

When you have been looking forward to reading a book for quite a while, more often than not it turns out to be a bit of a disappointment but not in this case. You deserve all the plaudits you are getting, Martin; it’s a terrific piece of work.

It was impressive on so many levels but I was particularly impressed by the way in which you described plots in such great detail without once including a spoiler.

Based on what I learnt from you, I now need to find out more about Anthony Berkeley whose work I admire enormously but who I know next to nothing about - he sounds a fascinating (and complex!) man.

I agree with John about Anthony Berkeley - after reading "The Avenging Chance" I sought out his Casebook of Roger Sheringham, but I haven't read any of his other stuff and definitely want to. Of the major writers profiled, he's by far the most obscure today.

Got my copy last week and just finished it. Excellent book! Thank you for pulling this information together and creating a wonderful book on many levels. Agatha Christie has always been my favorite and as a result I've ignored other writers from this era. I just started my first Dorothy Sayers tonight-"Whose Body?", which I found as a 1960s book club omnibus yesterday at a local used bookstore. Thanks for putting many of these authors back into the spotlight!

I am enjoying it so much, Martin! It has really changed my view of Golden Age crime fiction.

I'm delighted by your comments - thanks very much. You will have gathered how much I admire Berkeley's work, even though he was a troubled man who sometimes behaved badly. It's very gratifying to think that the book is encouraging serious readers to try new authors, and new books.