Forgotten Book - The Colour of Murder 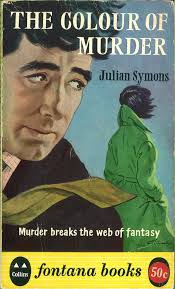 Julian Symons' The Colour of Murder won the CWA's "Crossed Red Herring" award in 1957; in other words, what is now known as the CWA Gold  Dagger for the best crime novel of the year. Quite an accolade, and you might think that, especially given Symons' stature in the crime world, the book would hardly qualify as "forgotten". But it's seldom been discussed, and I must admit that although I read it in my youth, even I'd allowed the story to slip from my memory.

When I picked up a copy on my birthday last week, I wondered how well it would stand up to scrutiny, almost six decades after publication. Rather casually, I started reading, and I soon found myself hooked. I have an awful lot of good books on my TBR pile, but The Colour of Murder demanded to be read, even though in one or two respects it resembles certain of Symons' other books (a real favourite of mine, The Man Whose Dreams Came True, springs to mind, though I should add that there are also many differences between the novels).

John Wilkins is an unhappily married man who suffers occasional blackouts. The first part of the book amounts to a statement that he gives to a psychiatrist, so it is fairly clear that he has been charged with murder. But of whom? His awful wife May is an obvious candidate, not least because Wilkins fancies a librarian called Sheila. The suspense builds relentlessly as Wilkins chronicles his own downfall.

The second part of the story details what happens after murder is committed. There's a lengthy trial scene - Symons was very good at those - and a nice twist at the end. There's really a great deal to enjoy in this story, especially Symons' sceptical view of the nature of justice. He was in many ways the heir to Anthony Berkeley in the way he exposed the fallibility of our legal system, and managed to make readers interested in the plight of people who are very far from perfect, such as Wilkins. An added bonus is the crisp portrayal of Fifties Britain, with its snobberies and its taboos vividly displayed. A first rate novel, which I enjoyed more on this second reading than I did the first time around, which was in the days when I was more interested in ingenious whodunits than novels of character and society. As I say, this book does have a neat plot, but it offers a good deal more than that...
Posted by Martin Edwards

Never heard of this one. And you've sold me, Martin. Two copies at my local branch of the Chicago Public library. Nice! Just reserved one.