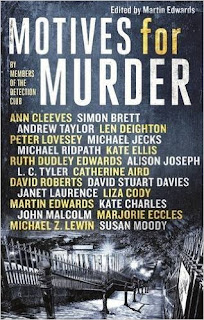 I'm delighted to announce that the Detection Club will publish in November a brand new collection of short stories, Motives for Murder. The idea is to celebrate the 80th birthday this year of one of the Club's most distinguished members, Peter Lovesey. The book will be published in Britain as a paperback original by Little, Brown, Peter's publishers, and in the US (with a limited hardback edition as well) by Crippen & Landru, a small press run by Peter's good friend Doug Greene.

Setting the wheels in motion for this book was my first act as President of the Detection Club. I wanted to honour Peter, who has given so much to the Club over many years (and has, incidentally, been a great source of information about its past) and I also wanted to showcase the short story writing talents of our wonderful members. The Club's membership is relatively small, and the deadline was exceptionally tight, but more than a third of those members offered to contribute to the book, which delighted me. The result is a very substantial anthology indeed;.

The book benefits from a foreword by the legendary Len Deighton. Len has published very little over the past twenty years, so I was thrilled when he agreed to get things rolling, and there is also a fascinating afterword by Peter himself, which includes many stories about his early days in the Detection Club back in the 70s.

Each of the twenty stories (well, nineteen stories and one sonnet!) was written specially for the book, and each is prefaced by a few words from the author about Peter's contribution to the genre. There are some wonderful things in this book, written by leading crime writers such as Ann Cleeves, Andrew Taylor, Len Tyler, Michael Ridpath, Liza Cody and...well, the list goes on. I'm thrlled that we've put together such a special book in  a very short space of time and hope that crime fans everywhere will find something in it to delight and entertain
Posted by Martin Edwards

Looking forward to this, and very pleased that there's going to be a hardcover!

Where will this be available, and when? Not currently listed on Amazon, which is an obvious source to check on.

Peter Lovesey is one of our finest British crime writers and richly deserves to have his 80th birthday celebrated in this way. ‘Motives for Murder’ was a great first project for you to have taken on as President of the Detection Club, Martin. With such a galaxy of talents, it will be a treat for all who enjoy short crime stories of quality, and for Peter’s fans especially of course. I’m sure his afterword will be most entertaining!