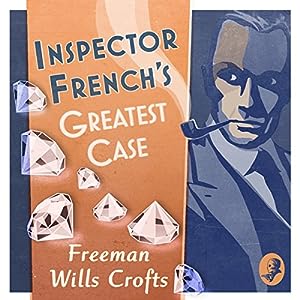 Freeman Wills Crofts published Inspector French's Greatest Case in 1924. It was his fifth book in five years. Already he'd enjoyed considerable success, especially with his best-selling debut, The Cask, and he hadn't troubled to create a series character. The title of this novel suggests that he didn't contemplate that Inspector French would be anything other than a one-trick pony. But things often don't work out as authors expect. In fact, French became a popular detective and Crofts continued to write about him to the end of his life, more than 30 years later.

The opening of the story is relatively conventional - it even reminded me, very distantly, of Gaboriau's The Blackmailers. A firm of diamond merchants is robbed, and a man named Gething is killed by whoever was responsible. Inspector Joseph French of the Yard is called in, but at first his determined inquiries get nowhere.

French, however, is made of stern stuff. He's known as "Soapy Joe" at the Yard, in reference to his habit of charming witnesses and suspect into telling him what he needs to know. We get a few insights into his domestic life - in moments of difficulty, he confides in his wife  Emily, who comes up with suggestions about how to tackle some of the puzzles he confronts. We also learn, in a gruff moment, that he lost his eldest son in the war. This is a book, like many others of the Golden Age, in which the shadow of the conflict looms, even though years had passed since the Armistice.

The plot is convoluted, and the planning of the crime turns out to have been as meticulous as French's investigation of it. French manages to pack in quite a lot of overseas travel, and Crofts' handling of the travelogue-type scenes suggest he was a seasoned and enthusiastic traveller. I very much enjoyed this book, and I'm glad that its recent reissue in paperback makes it widely available once again.
Posted by Martin Edwards

Crofts is one of those writers who divide opinion - I like his work in general, although he was no great stylist as a writer (some of his dialogue reminds me of the Harry Enfield characters Mr Cholmondeley-Warner and Grayson!)

The cover design is good, although the man doesn't fit my mental picture of French. It's certainly better than the one on my Penguin copy, which is really awful even by the low standards of early 60s Penguins.