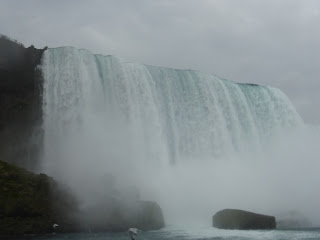 I've just returned from Bouchercon in Toronto, and it was a pleasant surprise to be greeted by warm Cheshire sunshine in mid-October.. My memories are very warm, too. It was a great convention, and amongst many unforgettable experiences were those outside the scheduled programming, notably a trip to Niagara Falls. It was a drizzly day, but the rain was nothing compared to the majestic torrents of the Falls. Christine Poulson and I sailed in the boat that takes you up close and personal to the torrent, and we learned exactly why you are handed ponchos before boarding. We got drenched, but it was worth it. Truly memorable. (So was the coach trip itself, but that's a story for another day...)

In terms of panels, I got lucky. I took part in a "History of the Genre" panel moderated by Sarah Weinman, which was terrific, and moderated a panel about private investigators and amateur sleuths, with a panel mainly comprising people I'd never met before, and who proved to be witty and articulate conversationalists. As an unexpected bonus, I was invited to join a panel moderated by Barbara Peters, who is one of the best publishers (and booksellers) anywhere, covering the perennial "hardboiled versus cosy" debate. My fellow panellists included Rick Ollerman, whom I first met at New Orleans Bouchercon last year, and whose book about the genre I'm looking forward to devouring shortly. Brian Skupin also presented me with the locked room antho he and John Pugmire have edited, which looks exciting. 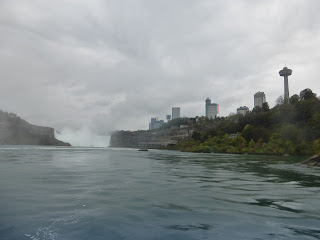 Janet Hutchings, editor of Ellery Queen's Mystery Magazine, invited me to join a group of her authors at lunch, and I was also asked to take part in a celebration of EQMM - an event hosted by Art Taylor, who was a very popular winner of a Macavity for best short story. As well as Janet and Art, I had the chance to catch up with Steve Steinbock of EQMM, with whom I shared a memorable trip to Hawaii earlier this year.

One of the strange things about a massive event such as this is that there are some people one never manages to get to see, which is a shame, but you can't do everything in such a mad whirl. I did, though, have the chance to spend time with quite of lot of old friends and new. One particular pleasure was being taken out to lunch by Peter Robinson a couple of days before the convention began - it's ages since we've got together, and it's always good to catch up. Meals offer a chance to escape the excitement to a nice restaurant and I dined with, amongst others, members of the Malice Domestic Board, Joni, Shawn, and Tonya), and with Steve and Alex Gray, Karin Salvalaggio, Jacques Filippi, and Peter Rozovsky. There was tea with Ann Cleeves as well as with Barbara and with Marv Lachman, an international reception hosted by Crime Writers of Canada, and parties hosted by Harper Collins and Poisoned Pen Press respectively. As well as a mega-book signing event organised by Harper Collins which almost had me running out of ink. 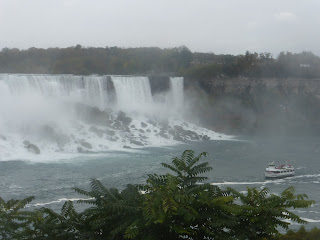 Travelling so far isn't cheap, especially given the current state of sterling, and very understandably, the cost deters some writers and fans. But by combining the trip with some sight-seeing and plenty of fun stuff, one may sometimes be able to justify the expense. This one - like (in different ways) my trips earlier this year to Dubai, Hawaii and Washington DC, ranks as one of the trips of a lifetime - I've just crammed them all into a short space of time! As for books, I did plenty of airport and plane reading, and I'm afraid that even though I promised myself I wouldn't actually buy any books, I did come back with so many that I pushed my luggage weight allowance to the limit. But it was worth it.. .
Posted by Martin Edwards

Great seeing you as always, Martin! And thanks again for jumping in on the EQMM event too--helping to save the day!