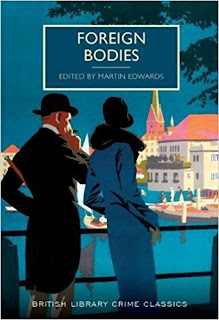 Over the past twenty-plus years, I've had the pleasure of compiling and editing a great many anthologies of crime writing. This year sees the publication of no fewer than five of my anthologies - four from the British Library, and the CWA collection Mystery Tour, due later in the year. But of all the anthologies I've been associated with, Foreign Bodies is one of the most exciting. And after a great deal of work behind the scenes, it finally hits the shelves tomorrow.

Classic crime fiction is usually associated in the public mind with stories written in the English language. Christie, Sayers and company in Britain, of course, and their American counterparts, the likes of Ellery Queen and C. Daly King. Few people realise how many detective stories were written in other languages at much the same time. And not only those by Georges Simenon, either.

The appeal of the detective story is worldwide,and that has long been the case. Sherlock Holmes inspired a host of writers to flatter Conan Doyle by imitation. Maurice Leblanc's stories about Arsene Lupin (which feature "Holmlock Shears",among other characters!) are quite well-known, the tales by the German Paul Rosenhayn about an American sleuth in the Holmes mould are long-forgotten. And even writers in Asia and South America were taking note of what Doyle and his successors were doing in Britain, and seeking to follow their example.

There are a number of reasons why compiling Foreign Bodies has proved quite a challenge. For a start, it's far from easy to track down some of the stories in their original forms. Acquiring the rights has sometimes been far from easy - we missed out on one intriguing "impossible crime" story aa a result of rights problems, for example - and getting the translations sorted out with a satisfying period feel has been another hurdle. Thankfully, I and the British Library have benefited from a great deal of help, in particular from John Pugmire of Locked Room International and American short story writer and translator Josh Pachter. I hope that readers find the result of our labours as fascinating to read as I have found it to put together.

Looking forward to reading it, Martin. How do you manage all your projects???!

--Jim Napier, on the other side of the pond

Thanks Martin for the notification - 'Foreign Bodies' is possibly the British Library reprint that I'm most looking forward to for 2017. And thanks for the hard work in compiling and editing all the short story entries!

Thanks, Jim. It's a juggling act, to be sure!! Hope you enjoy the book.

Hi Jonathan. I'm sure there will be ebook versions available before long.