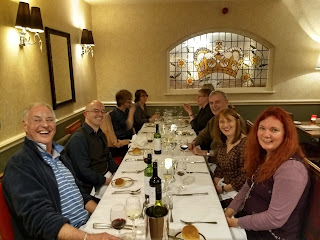 I've returned from an extremely enjoyable week-end in Yorkshire, celebrating the 30th anniversary of the foundation of the northern chapter of the Crime Writers' Association. The company was excellent, and that's been a constant over the years, even though the names and faces have changed. In fact the only people from that very first meeting who made it to the same venue, the Crown Hotel in Boroughbridge, were myself and my then fiancee, now Mrs Edwards. She reminded me how nervous I'd been ahead of that first meeting, which was also the first time I'd met any crime writers in person. But I needn't have worried, since I was made very welcome by the likes of Peter Walker, Peter Lewis, Reginald Hill and Bob Barnard, and this spirit continues within the CWA to the present.

It was actually the autumn of 1987 that we had that inaugural meeting, and in that time the chapter has only had three convenors. Peter Walker, who sadly died last year, was succeeded by Roger Forsdyke, who has now, I'm glad to say, resumed writing after a break due to ill health. And Roger's successor, Ricki Thomas, had done a great job in organising our return to the Crown.

Ten of us met up for a convivial dinner the previous evening, and it was a particular pleasure to welcome a brand new member, Antony Johnston, a highly successful graphic novelist who has recently turned to crime writing. At the other end of the scale, on Sunday I was delighted to see again an old friend, Stephen Hayes, who as Stephen Murray was a successful writer for Collins Crime Club and an early member of the northern chapter; his career has, however, followed a different path over the past twenty years or so. Again, I'm hoping that Stephen - a very talented novelist - will soon be writing more crime novels.

Among all the merriment, there was time to reflect on a number of absent friends, as several long-standing members are currently affected by ill-health. But there have been so many happy times over the past 30 years - not least week-end get-togethers in the Lake District organised by the great Reg Hill, and three anthologies featuring names such as Ann Cleeves, Stuart Pawson, and Val McDermid - that the over-riding mood was one of delight. The CWA's regional chapters are a source of great strength to the organisation, and I do encourage any crime writer who is reading these words to take part in their own local chapter's activities. I'm sure you won't regret it.

Thanks to Roger Bullock for the photo at the top of the post, and to Sarah J. Mason for the below photos, taken when northern chapter members visited Magna Large Print way back in 1995. Those pictured include Tim Cleeves, Alanna Knight, John Baker, Stuart Pawson, Alan Sewart, Meg Elizabeth Atkins, and Peter Walker. You might even recognise a much younger version of me. 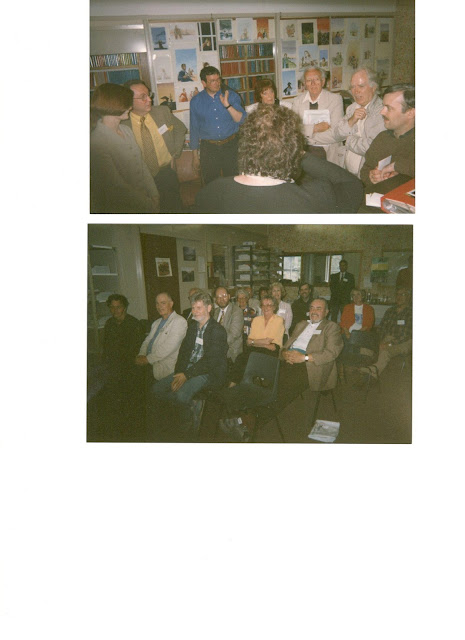