Forgotten Book - The Woman in the Sea 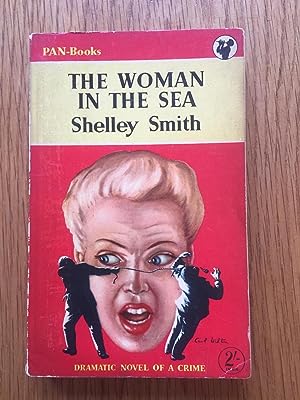 An older woman called Mrs Robinson seduces a naive young man. Sounds familiar? Well, my subject today is not The Graduate, but a much less familiar story, Shelley Smith's novel of 1948, The Woman in the Sea. It was her sixth book, and it's the work of an accomplished and interesting novelist, much admired by Julian Symons.

There's an Author's Note at the beginning, in which Smith states that "Looking about me for a suitable plot by which to illustrate certain aspects of morality which were much exercising my mind..." she recalled a real life case which seemed "to provide a framework both solid and pliable enough for my purpose". Here she is referring, I have little doubt, to the Rattenbury and Stoner case of 1935 (although that case bears uncanny similarities to the earlier, and even more famous, Thompson and Bywaters case).  She denies that her characters are intended to represent their real life counterparts,and on the whole I think this denial is not disingenuous, but fair enough. Francis Rattenbury, for instance, led a very different life from Zoe Robinson's husband Bertram.

The book has a prologue involving the discovery of the body, and essentially the rest of the story is a flashback, recounting the events in a doom-laden house which led up to that particular death. I suspect that Smith realised that her method of structuring the story reduced the tension, but that she though it a price worth paying. A debatable decision, as far as I'm concerned, but despite being quite sure how it was all going to end, I kept reading.

This is because Smith was a writer of genuine ability and intelligence. She could plot very well when she wanted to, but her main concern here was with those issues of morality. To a modern reader, perhaps these are not quite as compelling as they were in 1948, but the account of Zoe's affair with a really rather stupid lad is handled with some poignancy. I'm glad I read it. Smith's constant determination to try to do something different strikes me as admirable.

Labels: Rattenbury and Stoner, Shelley Smith, The Graduate, The Woman in the Sea, Thompson-Bywaters case

I was thrilled to discover that you had again reviewed a Shelley Smith novel (being directed to it by visiting John Norris' Pretty Sinister blog.) I found your welcome review admirable and perceptive--especially your pinpointing how Smith (or Nancy Boddington to give her real name) used crime fiction to explore human themes, gradually moving away from purely plot-driven narratives. The only thing that you failed to point out is that every one of Smith's novels, including the Woman in the Sea, has been returned to print in the past year! They are now available on Amazon in both paperback and E-editions, from Endeavour Press Media. I ought to know: I'm agent for the Smith estate! You might also be interested to know that Thorpe Large Print will shortly be publishing the first NEW Smith book in decades: THE MISSING SCHOOLGIRL, a collection of her un-reprinted short stories, which I have edited.
Respectfully yours, Phil Harbottle
PS Endeavour are also publishing other crime clients, including, inter alia:
John Russell Fearn, Gerald Verner, and Richard Wormser.

Thanks for the review Martin. Which would you say are Shelley Smith's best mystery novels? :)

Thanks, Phil, very interesting and informative.

Jonathan, I'd go for An Afternoon to Kill and The Lord Have Mercy, both of which are excellent.

Goodness, I hadn't realized they were all reprinted. Martin's right, Jonathan, those two titles are superb: the first especially for twisty mystery fans.