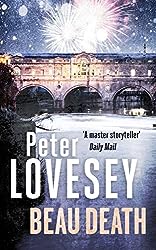 Peter Lovesey is one of those writers - his friends Reginald Hill and Robert Barnard were among the others - whose crime novels I read and enjoyed long before meeting the author in person. I've followed his career closely for a long time, and although I've not read everything he's written, there aren't many gaps. He's a wonderful entertainer, and it was a pleasure as well as a privilege to interview him about his long career at Crimefest last year.

All this is by way of preamble to the news that he recently published his latest novel, another entry in the very popular Peter Diamond series. It's called Beau Death, and given that the Diamond series is set in Bath, you don't have to be a detective to figure out that the fascinating historical character of Beau Nash plays a significant part in the story, even though it is very much an up-to-the-minute contemporary mystery. There's even a scene set at an infinity pool.

The story opens with a dramatic discovery during the course of a house demolition. A skeleton is found, seated on a chair and in 18th century dress. Peter Diamond finds himself investigating the potentially the coldest of cases, and we learn a great deal about Nash, someone about whom I'd previously known very little. As well as supplying a reminder of the author's fascination with history, it's all very interesting. Of all British crime writers at work at present, I doubt if any supply more background information than Peter Lovesey, with the possible exception of Stephen Booth, and I'm pretty sure that for some of their fans, that is an important part of their books' appeal.

For me, Peter Lovesey's characterisation, humour, and plotting are key, and I'm glad to report that these elements are here in abundance. It's quite a long book, and one of the reasons for this is that the plot is deceptively elaborate, so that one never quite knows what is coming next. I have to admit that I was fooled by the final twist, and not for the first time by this admirable writer. And I should also add that there are plenty of incidental delights, including a witness who has a thing about the Royal Family, and a host of amusing set-pieces.
Posted by Martin Edwards