Books for Christmas (and any other time of year...) 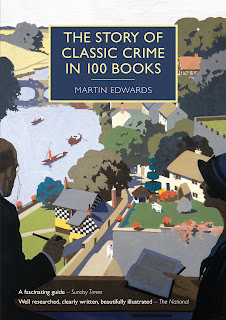 If you're anything like me, you still won't have finished your Christmas shopping. So today let me highlight a few books you might like to seek out. Naturally, I can't resist reminding you about my own titles. Not only Gallows Court, but also the Macavity-winning The Story of Classic Crime in 100 Books, available in paperback as well as hardback. Then there's The Christmas Card Crime and other stories, a British Library anthology that's been in the small publishers' charts for weeks, and has dodged around and about the number one spot in the Amazon anthology bestseller lists for as long. To say nothing of Ten Year Stretch (the CrimeFest anthology), Blood on the Tracks....no, no, I must stop!

And one reason I must stop is because there are loads of other books I'd like to mention. And if I may, I'll begin with a few titles that may not be on your radar from authors of talent who don't have massive publicity budgets behind them, but who are certainly worthy of serious consideration by crime fans. End of Term by A.C. Koning, for instance, is definitely worth a look. It features a blind detective, Fred Rowlands, and is set in Cambridge in the 30s. I met the author at a crime event in Cambridge a year ago, and I think her work deserves to be better known.

Someone I first met a couple of years back, at the Essex Book Festival in Southend, is Leye Adenie. He's a really talented writer, and I was delighted that a short story of his featured in last year's CWA Short Story Dagger shortlist. His latest novel is When Trouble Sleeps. Again, he's a writer who will in my opinion become increasingly well-known.

Guy Fraser-Sampson is an experienced author, someone else I met at the festival in Southend. Guy is one of that increasing band of novelists making very good use, in a variety of ways, of the settings, characters, or conventions of Golden Age detective fiction (Alison Joseph and Andrew Wilson are among the others). Guy's latest is The House on Downshire Hill.

Now for books for which I've given blurbs during the course of this year. It's impossible, of course, to respond to every such request - life is simply far too short, and from time to time I have to go into blurb purdah. (As now, when I really need to get on with the next novel....) But here are three of the books I managed to read, and with enjoyment.

Abi Silver, a fellow lawyer, is responsible for The Aladdin Trial, which I described as "An enjoyably elaborate and distinctive variation on the courtroom thriller." Of Gigi Pandian's The Cambodian Curse and other stories, I said: "Mysteries about seemingly impossible crimes have a long and distinguished pedigree and in this collection Gigi Pandian keeps the tradition going with verve and ingenuity." Another collection of short stories comes from Teresa Solana, who comes from Spain but now lives in the UK. The First Prehistoric Serial Killer and other stories is a collection of which I said: "Teresa Solana's distinctive writing is humorous yet thought-provoking, and her short fiction is as entertaining as her novels."

If you're not already spoiled for choice, I could go on and on, mentioning books by splendid authors whom so many of you love such as Ann Cleeves, whose latest Shetland novel I reviewed recently; Kate Ellis, who has just published The Boy Who Lived with the Dead (I'm also desperate to get round to The Mechanical Devil, which has been high on my TBR list for a while) Sarah Ward, author of The Shrouded Path, and...well, it's getting late, and time's running out on me. Happy gift-buying!

Thanks. Following your recommendations, I was able to buy last minute gifts for relatives this Xmas.

Glad to be of service and happy Christmas, RJS!