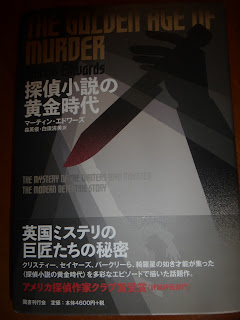 I've just received my copy of the new Japanese edition of The Golden Age of Murder. And a handsome hardback volume it is. Of course, I can't read a word of it, since I don't speak or read Japanese, but seeing a book that one laboured over for so many years translated in this way is truly gratifying. I'm very grateful to the publishers and the hard-working translators who are, I'm assured by a Japanese friend, highly skilled.

I've never visited Japan (or at least I haven't so far; one never knows what the future may bring) but it's a country that I find increasingly fascinating. This is partly as a result of reading more Japanese detective fiction, partly as a result of having more contact with people from Japan. A couple of years ago, I was flown down to London to take part in a documentary for Japanese TV about classic detective fiction, and there's clearly a great appetite for the genre in Japan.

I wrote about The Tokyo Zodiac Murders the other day, and it's one of a number of ingenious detective novels from Japan which have been translated into English. Pushkin Vertigo have, for instance, published a couple of books by that fascinating character Masako Togawa. I've also enjoyed the work of Alice Arisugawa, whose non-fiction book about locked room mysteries is delightful to leaf through, even if one doesn't know the language, because of the gorgeous illustrations. Japanese culture seems very different to someone like me, raised in conventional fashion in the west. But it's enormously interesting, and Japanese crime fiction certainly appeals to me much at least as much as Nordic Noir.

I'm delighted to say that there will also be a Chinese translation of The Golden Age of Murder, though that won't be published for another twelve months. In the meantime, I've just received a book from China that I'm really thrilled to see. It's primarily a collection of signatures and inscriptions from classic crime writers, British and American, and again the emphasis on images means that even if, like me, you speak no Chinese, it's still fascinating to look at. I supplied some images of inscribed books from my collection to the two editors, and my congratulations go to Eliot Han and his colleague for producing a splendid and (as far as I know) unique volume. Great stuff! 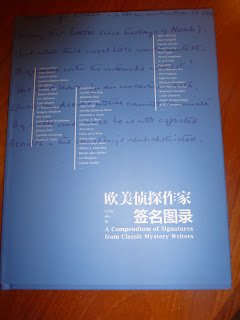