Forgotten Book - Flush as May 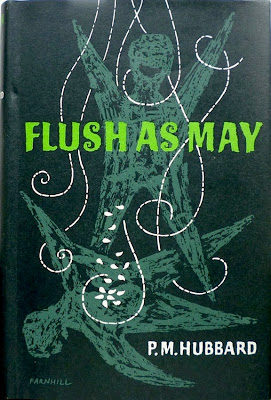 P.M. Hubbard came late to novel writing. He was 52 when his first novel of suspense, Flush as May, was published, on 7 January 1963. He'd written poetry at Oxford, winning the Newdigate Prize, and spent many years as a civil servant in India prior to returning to Britain and becoming a freelance writer. He wrote for Punch, but once he'd established a distinctive niche in the suspense genre, that was the area on which he focused until his death in 1980, with occasional ventures into young adult fiction.

Flush as May reflect his literary tastes. The writing is maturing and sophisticated, with a crisp eye for the right word which is a very clear clue to Hubbard's poetic leanings. The setting was rural England, and almost all of Hubbard's books were set in the British countryside. As a young library user, keen on dramatic action and mystery, I didn't read Hubbard. His writing, from a quick perusal of a few pages, seemed too low-key and unexciting for me. I suspect I was in the majority - he won the admiration of a wide range of connoisseurs but never became a bestseller (a cynic would say he was too good a writer for that!). Now I'm older and slightly wiser, I recognise his merits.

Flush at May is in essence an amateur detective story. It begins splendidly, on May morning, when a young woman called Margaret comes across a man's body. But when she alerts the sceptical village constable, and takes him to the scene, the body has disappeared. She encounters a young man called Garrod who proves to be a fellow student at Oxford, and the two of them investigate, with Margaret taking the lead.

The story is never less than intriguing, and there are moments of drama and action, but I suppose my younger self would have felt dissatisfied by the ending, and would have found it anti-climactic. I think that, to some extent, Hubbard's inexperience as a novelist is evident. For instance, the village constable is an interesting character, but he never reappears in the story. Readers who look for a conventional resolution in the usual detective story manner will probably feel frustrated. But now I can see what Hubbard was trying to do and I'm impressed.

If you are interested in learning more about Hubbard, there are some excellent pieces and links on the Existential Ennui blog This is not a flawless book, but it's made me want to read much more of his work. My copy, by the way, although it lacks that excellent Kenneth Farnhill dust jacket which is pictured above, has an inscription to a friend on the day after publication. bearing the phrase 'but for whom...' Very appealing.

There is a long article about Hubbard on my M*F website, including an interview of sorts by letter mail and an annotated bibliography. I think you'll enjoy it:

I really did enjoy it, Steve. Fascinating stuff and truly informative. Hubbard's interests as a crime writer are very different from mine but I find I have much more sympathy with his subtle approach now than I used to do. Mind you, I'm not surprised to hear that he didn't plan his stories!

Great to see a novel of P M Hubbard’s featured here. So pleased you appreciate his merits now!

I read Hubbard’s ‘A Thirsty Evil’ maybe thirty years ago, was entranced, and went on to read more – ‘A Rooted Sorrow’ was one, ‘The Causeway’ another.

What I most remember is that brooding air of menace in pastoral settings he was so adept in conjuring. Yesterday, wishing to reacquaint myself with his style, I read his short story “Mary” in ‘Winter Crimes 3’ edited by George Hardinge. And I was not disappointed.

Thanks, Paul. Yes, it took me a long time, but I got there in the end! You are dead right about that brooding air of menace in pastoral settings. I've acquired a couple more of his books and very much look forward to reading them