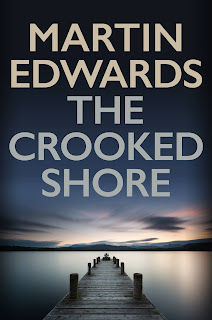 The Crooked Shore, the new Lake District Mystery - and the eighth in the series which began with The Coffin Trail - is published in the UK on 22 July. To celebrate, the publishers Allison & Busby have come up with a new style of cover which I understand may be adopted in due course for the backlist titles when they come up to be reprinted. And the cover image for the new novel is above.

The appearance of a new book is always a cause for celebration, at least on the author's part! It's hard for me to believe that Hannah Scarlett and Daniel Kind made their first appearance as long ago as 2004. A lot of water under the bridge since then, for them and certainly for me. The Coffin Trail marked quite a turning point in my career. It was one of the six books shortlisted for the Theakston's prize for best crime novel of the year and then the third in the series, The Arsenic Labyrinth, was shortlisted for the Lakeland book of the year.

So the Lake District has been a happy hunting ground for me in all kinds of literary ways, as well as a wonderful place to conduct research. While developing the series, I've tried to ring the changes, not just by varying the locations of the mysteries, but also by utilising a range of narrative techniques. I think this has helped to keep me, and the books, fresh.

It's quite some time since The Dungeon House appeared. That book was in itself an attempt to do something rather different with the series and it's a novel I'm particularly proud of. That same year, 2015, also saw the publication of The Golden Age of Murder, a book that had a transformational effect on my career. In the intervening years, I can honestly say that the question I've been most regularly asked by readers is when the next Lakes book is coming out. I'm grateful for the patience and their enthusiasm for the series has been motivating. I've been thinking about The Crooked Shore for a long time and it marks a significant development in the series in a variety of ways. There is a Netgalley link here  It's a book I'm very glad to have written and I'm looking forward to publication with great enthusiasm - and hoping that readers new and of long-standing will find plenty in it to enjoy.

I must confess to a special fondness for your Lake District Mysteries.

Daniel and Hannah are such relatable characters we genuinely care about them. The plots, with dark doings of the past seeding present day murder, are quite brilliant and keep us guessing. Then there’s the convincing characterisation with its fascinating psychological aspects together with the wonderful Lakeland atmosphere you conjure so well.

I can’t wait to acquire a copy of ‘The Crooked Shore’. And yes, I think the cover, with its moody Lakeland scene, should attract crime fiction fans in droves.

I just have to tell you how much I love this book! I read it at a single sitting this afternoon because I couldn't put it down, and now I am impatient for the next one in the series. Please don't make us wait another 6 years!

I'm so glad you enjoyed the story, Fiona. I recall our talking about it at Woking and of course I was anxious to make sure that it was strong enough to appeal to my loyal readers. So your reaction is extremely rewarding, I can promise you.