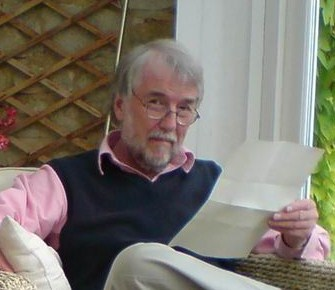 My first meeting with Leo McNeir, a fellow British crime writer, was in the unlikely but delightful location of Honolulu, when Left Coast Crime was being held in Hawaii. We later went out for dinner in a restaurant named after Earl Derr Biggers' crime novel The House Without a Key (among our companions was Parnell Hall, the witty and charming American writer who sadly died recently) and we've spent enjoyable time together since then. Leo has recently published his latest Marnie Walker novel, Beyond the Grave, and I invited him to contribute a guest piece:

'I came late to writing fiction after a long career in management, followed by a second career lasting some twenty years as a language consultant and lexicographer, including a stint as professor of language policy at the European University of Public Administration in Rome. How this progression came about is a long and not very relevant story. That I came to be a published author almost by accident is perhaps more relevant. It happened like this.

One winter’s evening my wife – my second wife, in fact – asked me if there was anything I had always wanted to do that I had not managed to do so far. I mentioned that I had always had at the back of my mind the idea of some day writing something. Why had I not done this earlier? I was far too busy with demanding jobs. I didn’t know Martin at that time, but I now recognise that I lack his immense energy and commitment. My wife said at once that she could help me with the writing. How? She would get me up at six o’clock in the morning, which would give me an extra hour in the day which I could use to write. To her surprise, and mine, I began the next morning.

I never expected to be published, but I wrote a narrative based on a journey in our narrowboat, ‘Sally Ann’. It was a kind of ‘road book’ with the Grand Union Canal in place of Route 66, and I wrote it simply for my wife’s enjoyment. Some years later my wife needed guidance on producing page layouts for a dictionary and consulted a neighbour who was director of an educational publishing firm in London. He asked for ten pages of text to use as an example, and she sent him the opening pages of Sally Ann’s Summer. Two years later our neighbour mentioned that his firm was branching out into fiction; he wondered if I had ever completed that novel, as he had enjoyed reading its beginning. He wanted to take it with him on holiday to their house in France. For various reasons he took instead the first draft of my book Getaway with Murder, read it in two sittings and phoned from Normandy to say he would publish it. I was pleased, but I didn’t feel like a proper author. I had no agent, had never had a rejection slip and had never approached a publisher. It felt like serendipity. It had all happened by chance, and now my thirteenth novel, Beyond the Grave, has just appeared.

My central character, Marnie Walker, is not an amateur sleuth, but she finds herself occasionally involved on the periphery of crimes. This mirrors to some extent my own experience on the fringes of an infamous murder case – known as the ‘body in the bag murder’ – in London in my youth. And there was also a time when, as director of the Institute of Linguists, I discovered by chance that the organisation was infiltrated by Russian agents and for some months I liaised with Special Branch of the Met. I can’t talk about what happened, but that really is another story.'