Forgotten Book - The Dead of the Night 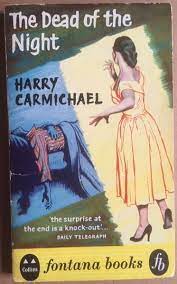 'The surprise at the end is a knock-out,' said The Daily Telegraph of Harry Carmichael's The Dead of the Night. The Fontana paperback edition of this book, originally published in 1956, contains further accolades from prominent newspapers. Carmichael's reputation has faded since his death in 1979, but he was a capable writer and there are some nice touches in this novel.

This story, like most of Carmichael's, features the insurance investigator John Piper and his journalist friend Quinn. Carmichael himself was a journalist before he concentrated on writing fiction - it seems that he was successful enough to be able to write full-time from a relatively early point in his career - and it's clear he enjoyed writing Quinn's scenes.

The story begins, however, with Piper. He is approached by a youngish woman called Jean Lincoln. Her father, Robert Lincoln, has been disabled by a stroke and Jean is suspicious of her step-mother, who is much younger than Robert and very glamorous. From this relatively straightforward opening, we are drawn into an elaborate mystery, involving a GPO robbery. a dodgy medic, the death of a nurse, and sundry other complications.

As usual with Carmichael, the plot is ingenious, although for me the problem with the big reveal was that I found it slightly hard to swallow. The shift of focus between Piper and Quinn is also something that didn't quite work for me, although it was a good way of maintaining the story's pace. Interestingly to me, some of the action takes place in the Kent village of Sturry. That just happens to be where the contemporary crime writer Catherine Aird lives, and it was Catherine who kindly passed her copy of this book on to me.

Labels: Harry Carmichael, The Dead of the Night