The Best Mystery Stories of the Year 2022 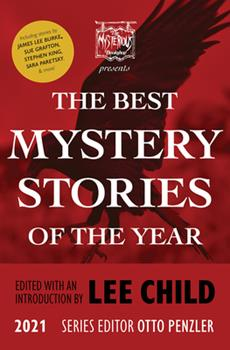 I first came across the name of Michele Slung more years ago than either she or I would probably care to remember, when her notable anthology Crime on Her Mind was published as a Penguin paperback in the UK. It was an admirable selection of classic crime stories featuring female detectives. There have been many such collections over the years - I've often thought of putting one together myself - but her book is the leader of the pack.

I mention Michele because she is working with the legendary Otto Penzler, for The Best Mystery Stories of the Year 2022, for which the guest editor will be Sara Paretsky. This is primarily an American publication, but stories from authors based elsewhere are, these days, eligible for possible inclusion. For example, my own 'The Locked Cabin' appeared in last year's collection, edited by Lee Child in conjunction with Otto - the cover image is above this post. Michele's role is to 'screen' the stories, which involves a huge amount of reading each year.

So the authors among you may wish to consider submitting your stories - provided they are original to 2022. No dusting down old material, then, however great it is! The other thing you have to bear in mind is that the stories have to be submitted as printed copies, not as email attachments or in some other non-print format.

If you're tempted, send your story to:

BEST MYSTERY STORIES OF THE YEAR

I'm not totally sure, so perhaps best to check.