Forgotten Book - Look to the Lady 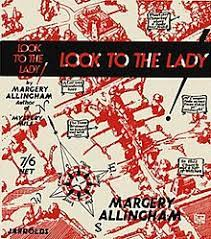 At Bodies from the Library last weekend, Jake Kerridge talked engagingly about the merits of Margery Allingham as a mystery writer. I like Allingham - although I prefer Christie and Sayers - and I was prompted to read one of her novels that I haven't tried previously. Look to the Lady, known in the US as The Gyrth Chalice Mystery, was an early Albert Campion novel, published in 1931.

It's a novel which illustrates the fact that it's often unhelpful to lump crime writers and their work into categories. In its early days, the Detection Club made much of the distinction between detective stories and thrillers - I guess this was due largely to the views and influence of Sayers and Anthony Berkeley - and thriller writers weren't even allowed to become members. But the fact is that Christie wrote several thrillers in the 1920s, as well as in later years, and there's no doubt in my mind that if I was forced to categorise Look to the Lady, I'd describe it as a thriller, not a detective story.

But that isn't a criticism. This story is a romp, generally light-hearted, but with one or two darker moments, notably when Campion is about to be kicked to death by an aggressive horse; this is a crafty murder scheme devised by a pleasingly villainous baddie. Of course, our hero survives, but it's a memorable scene.

The novel concerns a family legend concerning a priceless artefact, the Gyrth Chalice. The legend reminded me slightly of a pleasing ingredient in Derek Smith's later book Whistle Up the Devil, but the stories are really very different. There are two maps (not counting the one of the lovely first edition dustjacket, pictured above) and plenty of incident, much of it entertaining. Not a masterpiece, but well-written and enjoyable light fare.

I think the US title is actually "The Gyrth Chalice Mystery". And I agree that it's a good read. Have you read any of the Campion continuation novels by Mike Ripley? I've only read one, but it was a good one, as I remember.

Thanks, Jonathan - quite right, not sure why I got that wrong, but now corrected. I've not read the continuation novels - I've still got a number of the originals to read and I hope to catch up on one or two more before long.

She has her own unique world building powers ...and very few of her Campions are true detective fare. Coroners pidgin,more work for the undertakèr,polìce at the funeral,flowers for the judge and dancers in mourning are detective stories.