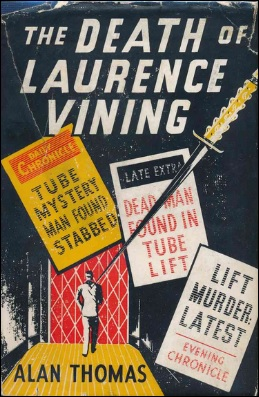 The Death of Laurence Vining, by Alan Thomas, first appeared in 1928. The story has been discussed quite extensively on the blogosphere. It's a 'locked room' mystery - in fact, the victim is found in a lift at Hyde Park Corner Underground Station, but the impossible crime element of the story is only part of its appeal. Thomas also plays a game with the reader - I won't spell out its precise nature, for fear of giving a spoiler. But some commentators have invoked Anthony Berkeley, and I suspect that Berkeley would indeed have found much to enjoy in this book (not least its treatment of 'justice'), even though it's not as well written as his fiction.

Vining is firmly in the tradition of the Great Detective, a brilliant amateur sleuth with an admiring 'Watson' in the shape of Dr Willing. At the start of the story, a man is sentenced to death on the strength of Vining's detective work, though oddly the description of the case is rather perfunctory. Soon it becomes clear that Vining is rather a nasty piece of work. Quite how nasty is one of the unsettling aspects of the story.

When he is found dead in baffling circumstances, Willing seems destined to solve the case. Instead, the detective work is done by a Scotland Yard man. One of the weaknesses of the story is that it features a Malaysian character whose presentation is unfortunate, to say the least. Another is that the central storyline is padded out. My interest flagged as a result.

This was Thomas's first novel, so I think we can forgive many of the rough edges of the story, which is rather unsatisfactorily structured. However, he does have some neat tricks up his sleeve. The motive was, for me (as usual) more interesting than the murderer's modus operandi. There are some good ideas here, even if their execution leaves something to be desired.