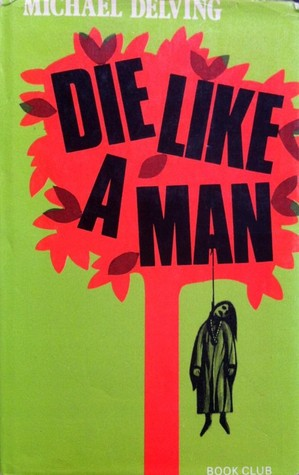 Until recently, I was completely unaware of the crime fiction of Michael Delving. Scott Herbertson did me a kindness by introducing me to one of his novels, Die Like a Man, which I devoured on my Italy trip with a good deal of enthusiasm. Published in the UK by Collins Crime Club in 1970, this is the third of five books featuring the American book dealer Dave Cannon, who also dabbles in antiques, and it's an entertaining thriller, benefiting from a good setting in Wales.

This is a first-person narrative and Cannon is quite a likeable figure, if occasionally slow on the uptake. Finding himself stranded in Corbridge. a town in south Wales, he soon encounters an interesting but eccentric older man called Tankerville. He visits Tankerville's home and offers to buy some books, only to be offered an ancient bowl which his host claims is the Holy Grail. Cannon is not convinced, of course, but when he's offered the bowl for just one pound, he has nothing to lose by doing the deal.

But shortly afterwards, Tankerville dies in unusual circumstances and it becomes very clear that a number of people want to retrieve the bowl from Cannon. A lively thriller ensues. Yes, you have to suspend disbelief, but Delving writes with verve and there are several touches (for example, mention of Welsh nationalism) that make this book interesting as well as entertaining. And it was written seven years before Jonathan Gash introduced Lovejoy...

Michael Delving was a pen-name for an American author, Jay Williams (1914-78), who wrote prolifically on a wide range of subjects. He spent a great deal of time in Britain, and his presentation of British people and British life is effective. On the strength of this book, I'd certainly like to read more of his work.

Nice to see you giving a shout out to Michael Delving, Martin. As a former bookdealer myself, I've always enjoyed reading crime novels set in this trade. A couple of other random ones I have enjoyed are Charlie Lovett's 'The Bookman's Tale' and Roy Harley Lewis's 'A Cracking of Spines'. (Cautionary note to authors to check their Amazon listings - 'The Bookman's Tale' is currently advertised as being by a Chalie [sic] Lovett, so if you search by author name only you might not find it!). Martyn

I've read all five of these Dave Cannon books. His business partner, Bob Eddison, travels with him in the second one. There's also a sixth book in which Bob Eddison has a case on his own.

Coincidentally I just read this earlier in the week! Yes it was an enjoyable read, I’ve read also one other. The plot is sometimes hard to believe and it’s a shame he violently killed one of the more attractive/sympathetic characters in the book (although presumably that was the point) Also the policemen initially investigating Tankervilles murder must be a bit shorted sighted to mistake medieval garb for a woman’s wig and dress! There is a difference!

Thanks for these comments. It's good to see that Delving is remembered in such a positive way.