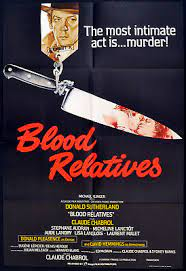 Claude Chabrol was an excellent film director, sometimes compared to Hitchcock but distinctive in his approach. Blood Relatives, a Canadian-French film of his from fairly late in his career is his take on an 87th Precinct police procedural by Ed McBain. The result of this collaboration of talents is suspenseful and interesting movie, with the setting switched to Montreal - apparently for tax reasons - but not to the detriment of the story.

Donald Sutherland plays Steve Carella, McBain's lead character in the series. As ever, he puts in a good performance as he seeks to unravel the truth behind a savage knife attack on two young women who are cousins, one dark night. The older girl is killed, the younger one is wounded but survives and gives conflicting descriptions of their attacker.

The suspects include a dirty old man played by Donald Pleasence and the dead girl's philandering boos, played by David Hemmings. Two impressive actors who are, arguably, under-employed in the story. There is also the handsome brother of the girl who survived; it turns out that he's been having an affair with the girl who died.

Carella spends a lot of the time reading the victim's secret diary, and much of the story is told in flashbacks. This is a clunky device, but Chabrol handles it pretty well. The culprit isn't too difficult to pinpoint, but the film is well-made. Mind you, it's striking to think how much attitudes have changed towards exploitative relationships in the past forty-plus years. The way an under-age girl is interviewed by Carella with nobody else present now seems rather alarming.