An evening to remember 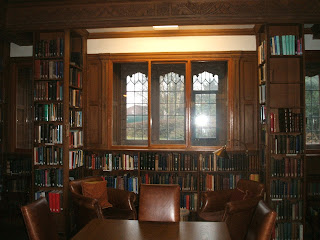 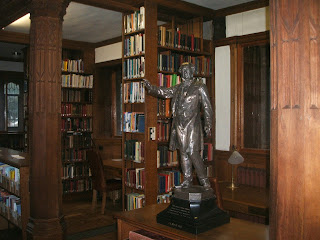 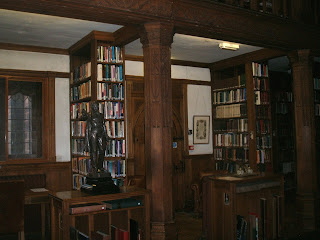 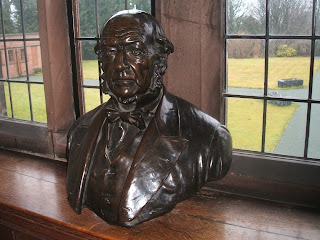 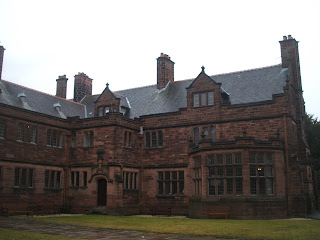 I've mentioned Gladstone's Library, in North Wales, a number of times on this blog, and regular readers will recall that I'm a huge fan of this unique and marvellously atmospheric place, which attracts book lovers and scholars from all over the world - and they can even stay on the premises (in rooms that are extremely pleasant, I may add.)

Yesterday evening saw the official, if slightly belated, UK launch of The Frozen Shroud, and I was especially lucky - not only that the Library hosted the event, as it has done for my last two Lakes books, but also that we were able to hold it in the stunning setting of the library itself. Normally, the library is still being used by researchers and residents in the evening, but because the Gladstone Room, where talks are usually held, is being refurbished, I was given special dispensation to make use of the library itself.

After a reading, a talk about researching the book, and questions, there was a chance to mingle with the audience, always very enjoyable. And a great (and, given the nature of visitors to the library) diverse and international audience it was too - also including Sarah Ward, well known to many of you for her excellent blog Crime Pieces. Sarah has returned to this part of the world after a number of years in Greece and it was good to see her again after our famous 'near miss' in the Harrogate quiz a few weeks ago!

I've been really pleased by reaction to the book so far, with wonderful reviews from The Literary Review and elsewhere. Very good for morale as I set about tackling the next Lake District Mystery.

And I'm delighted to say that I have two further events scheduled at Gladstone's Library in the near future. First, a Victorian murder mystery evening staged as part of their first literary festival, Gladfest (others appearing include Stella Duffy, formerly a writer in residence at the Library) and then I'll be giving my first ever after dinner speech - at the annual conference of the Sherlock Holmes Society of London's annual gathering. Looking forward to both occasions...
Posted by Martin Edwards

It looks a wonderful place to launch a book, Martin. I look forward to reading this new title, and best of luck with it.

Martin - It sounds like a lovely evening! Thanks for sharing, and for sharing those 'photos. I wish you much, much success with The Frozen Shroud.

Congratulations on the launch, Martin, and what a wonderful library.

Janet, Margot, Frances, thank you. It was a lovely experience. And Frances, I hope to see you in Oxford at the weekend.

It was a lovely evening, Martin and you gave an excellent talk. So much so that I started your book last night, it was so tempting. I have some photos which I'll add to my review when it is up this weekend.

I've always wanted to visit England. What a wonderful way of reminding me why.

Wow, what a beautiful library. And good luck with the new book.

Ed, I really do hope you can make it over here - and see the library tooo!