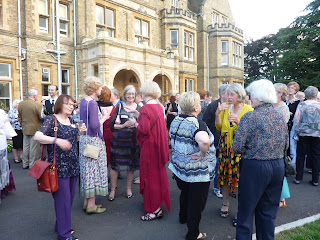 St Hilda's Crime and Mystery Week-end is a crime conference with a distinctive and delightful personality which makes it very different from other crime-related events. The setting is St Hilda's College, Oxford, and I'm just back from the twentieth conference, which was, if anything, even more enjoyable than usual. The fact that this week-end is not advertised, has no promotional website, and yet has flourished for two decades, speaks for itself. When people do find out about it, and attend, they tend to love it, and go back year after year. There's no clearer sign of success than that.

The theme this year was "The Present and Future of Crime Fiction" and when I was asked to deliver a paper, I thought I would be very crafty and find a neat way to weave a talk about the Golden Age into the over-arching theme. What I hadn't anticipated was that some other writers would have the same idea - and my talk was on Saturday afternoon, while just before lunch P.D. James herself would be speaking about....the Golden Age.

P.D. James was aptly described by Natasha Cooper, the chair of the conference, as the true Queen of Crime and it was wonderful to see that her audience regarded it as a true privilege to be able to listen to her. And so it was. Fortunately for me, there was no overlap between her topics of mine, and one of the more daunting experiences of my public speaking career (yet a real honour) was to see Baroness James herself sitting in the front row to listen to my paper. I did feel a bit nervous, having foolishly said the previous evening that I feel more confident about speaking in public nowadays than I used to, but I managed to get through to the end without drying up completely. The papers are delivered in pairs, so P.D. James spoke along with Frances Fyfield, while I was paired with Peter Robinson - and it was very good to catch up with him again over the week-end.

The other speakers included Andrew Taylor (talking about C.S. Forester), and Val McDermid, while two after dinner speeches were given by Bernard Knight on the Friday, and Cilla Masters on the Saturday. There was also an extremely interesting panel chaired by Ayo Onatade on the future of crime publishing. The attendees included quite a number of notable writers who weren't actually speaking - a few examples include Frances Brody, Ann Granger, Marjorie Eccles, Kate Ellis, and AK Benedict - while I met several writers whose first books are due to appear shortly. As ever with these events, the combination of catching up with old friends and meeting new people was very pleasurable.

Much of the success of St Hilda's is down to continuity and the sterling efforts of the organisers, Kate Charles and Eileen Roberts, and Natasha Cooper, who chairs quite brilliantly in a calm, efficient and extremely generous style that few if any could match. This trio put a huge amount of work into the event, and their reward is simply that they give a lot of people a great time.If you've never attended St Hilda's, I do recommend it very strongly. The dates for next year are 15-17 August 2014.

Excellent write up Martin! I am still trying to sort out my blog posts about St Hilda's and will let you know when it is up!

My first time at St Hilda's but it won't be my last. Martin, yours was one of my favorites! The whole atmosphere was truly wonderful.

Thanks, Ayo.
Marni, very kind of you. Glad you enjoyed the week-end.