After returning home from St Hilda's, and the happy experience of meeting a good many old friends, it was very sad to learn of the loss of someone I've known since the start of my career as a crime writer. This was Meg Elizabeth Atkins, who died at home on Saturday after a long illness borne with great courage.

Meg and her husband Percy attended the inaugural meeting of the Northern Chapter of the CWA where, more than 25 years ago, I had my first introduction to the sociable world of crime writing. Meg and Percy were, from that day on, stalwarts of the Northern Chapter, and they organised numerous events for us all to enjoy over the years.

The photo of Meg and Percy that accompanies this post was taken at the 20th anniversary Northern Chapter lunch. Naturally I was delighted to see them when we celebrated our 25th anniversary at Pickering last autumn, but by then it was clear that Meg was quite poorly. Even so, she and Percy came along to the CWA's annual conference this spring at Windermere, the last time I saw her. Suffice to say that throughout all the time I knew her, Meg displayed a sparkling sense of humour and vivacious personality which were not noticeably dimmed when she was diagnosed with terminal cancer. A very brave person.

And also a good writer, although far from prolific. Her books appeared infrequently and at irregular intervals.and I think this is why her work is not as often discussed as it might otherwise have been. Her first novel appeared almost fifty years ago, but had less than a dozen successors in the intervening years, perhaps the best known being Palimpsest and Cruel as the Grave.

I shall miss her. 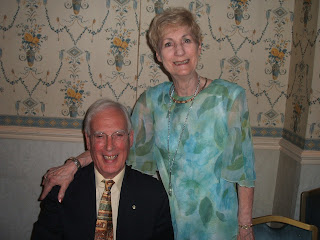 Yes, you've said it so well, Martin. I first met Meg and Percy in 1978 in New York, at the Crime Writers' International Convention. A group of Brits, all first-timers in New York, teamed up and had enormous fun, much of it thanks to Meg's sharp, witty comments. Add the late Reg Hill, Peter N. Walker, Joan Lock and agent Gerald Pollinger - and you can imagine the laughs we had. We all stayed close friends in the years since. I recall that Meg hated going in lifts and somehow we persuaded her (clinging to Percy) to go to the top of the Empire State Building. A brave, delightful, unforgettable friend.

I certainly can imagine, Peter. Thanks for this lovely memory of Meg.

It's very sad. Meg was so kind and welcoming at my first ever Northern chapter meeting and that wasn't the only time she went out of her way to be kind. And her sharp wit made her great company. She'll be very much missed.

Thanks, Chrissie. Yes, the loss of Reg Hill and Meg in successive years has been a real blow for our closely-knit group. We won't forget them.

I'm so sorry to hear of this. I discovered Atkins's books last year, and I think they're brilliant. Palimpsest is perhaps my favorite - it's so richly atmospheric. I rarely enjoy or seek out books with supernatural elements, but somehow her books are just the right amount of mysterious, sinister and understated - there's something elegiac, rather than horror-film scary, about her magic and ghosts.

Thanks for your kind and perceptive comments, Martin. One of Meg's most memorable characteristics was that she had time for everyone, old or young, new or established. And of course her acerbic wit, always a bonus. As indeed is dear Percy.

Kacper, Susan, many thanks.

I know this is quite an old post but I just discovered her books this past week on Kindle. I was researching to find others, because I enjoyed the DCI Hunter books so much,when I found this post. I'm so sorry to learn that she was not prolific and that she is gone. Her books are quintessential English mysteries.

Nice to hear from you, Carla. Yes, she was not only a nice lady but a good writer.

How very sad, I too just discovered her books. Very much enjoyed the first one I read, and am looking for more to download.

I'm another who discovered this blog when I was looking for more of the DC Hunter series. It's sad to discover that the writer is no longer with us. The two books I've read so far have been a delight. I will have to savour the ones to come, knowing there will be no more.