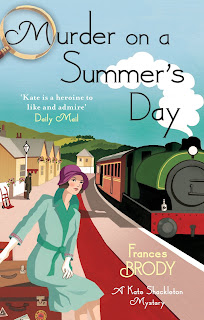 Frances Brody is one of the more successful crime writers to have emerged in the North of England in the past few years. Her historical mysteries have earned a large following, and I suggested to her a while back that when her new book came out, she might like to write a guest post for this blog. And now here it is.

"The idea for Murder on a Summer’s Day struck me with the force of a falling tree, a family tree to be precise. A good friend told me about researching her ancestors: generations of folk. One day someone new cropped up, a third cousin twice removed: Stella Mudge. Granddaughter of Ilkley farmers, daughter of a circus performer, Stella was brought up in the Earl of Ellesmere, Bethnal Green. Having studied French, painting, music and ballet, she joined Jack Hulbert and Cecily Courtneidge’s chorus line. When the company travelled to , Stella did too, even though she was under age. From there it was a crisp Chassé to the Folies Bergere. A young Indian maharajah spotted her, and that was that.

I have changed the names. As far as I know, no dancer called Lydia and no Prince Narayan really did visit Bolton Abbey in August, 1924 and stay at the Cavendish Arms. But if you read the story I hope you will believe every word, as I do. Narayan goes deer stalking, and fails to return. Kate Shackleton takes a telephone call from her cousin James, a civil servant in the India Office. Within a couple of hours, Kate is on the scene, investigating first a disappearance and then a murder.

While real life doesn’t have to make sense, fiction does and there is always a moment when what needs to be looked into becomes dauntingly clear. Writing about Bolton Abbey involved learning something about the estate’s owner.

The Ninth Duke of Devonshire, Victor Cavendish, did not spend an awful lot of time at his Bolton Abbey estate, except during the grouse shooting season. Why would he when family property included Chatsworth House, Hardwick Hall, Holker Hall, Londesborough Hall, in , Chiswick House and 2 . He was Colonial Secretary at the time Narayan went missing. It would be his duty to take a personal interest when an Indian prince disappeared from his patch. Consequently, he has a walk on part.

The Cavendish family made their money from the dissolution of the monasteries, from timely deaths and propitious marriages. Bolton Abbey is the name of the village and the area surrounding the ruined priory that, for me, is the dominant image of the place.

This is an area, a beauty spot, which teems with stories and legends. Now here is one more, that of the prince and the dancer who drove a white Rolls Royce along narrow country lanes, blissfully ignorant of what fate held in store."

For an excerpt from Murder on a Summer’s Day, go to Frances' blog

How fun to discover a new mystery writer! Frances Brody may have a large following in England, but here in the heart of Texas, where only Barnes & Noble offers new books for sale, it's difficult to find anything beyond the current favorites on the shelves. Say what they will about new media, but blogs such as this one are invaluable for spreading the word about new and forgotten books to those of us in cultural backwaters. Glad to make your acquaintance, Ms. Brody, and I will be interlibrary-loaning your books shortly!

What a lovely story - thank you for hosting it!

Could you possibly fix the glitch in the link to Frances' blog?

Hi Jean, trust an IT expert to spot that! Mission now accompplished!

Thanks, Sappho, I hope you enjoy them. And I bet the weather is nicer than here in Texas right now!

Hi Martin,
I read your blog first the other work when I was considering doing one of my own. Have made a start but just want to thank you for reminding me that Frances's new book is out so I can go and order it from Formby Books. I've enjoyed all of those I've read so far - and having visited the setting a few years ago with John on a crisp and sunny February day, I can't wait to get my hands on the book.

Hi June, great to hear from you - and I hope the writing is going well.