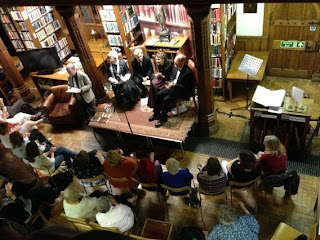 Gladfest 2013 is the first literary festival to be staged at Gladstone's Library, and it was so enjoyable that I'm hoping it will become a fixture in the calendar from now on. I was only present for part of the week-end, but it was clear from talking to the delegates that everyone was having a good time. And why wouldn't they, in such an atmospheric and historic setting?

When I was first invited to take part, I was delighted to accept. This was so even though I'm well aware that inaugurating a literary festival can be fraught with difficulties. A great deal of hard work on the part of a lot of people is required, and even then, things may not go to plan. The now legendary Kidwelly ebook festival last year (not an event repeated in 2014) was an example of how things can take an unexpected and unfortunate turn, and although on a personal level I had a very good time there, that was due to the chance to bond with fellow authors, rather than readers, since the latter were conspicuous by their absence. It was all rather a shame. No such problems at Gladfest.

I staged my Victorian murder mystery on Saturday evening, and the audience participated with tremendous enthusiasm. I loved the gasps when the solution was revealed! Those present included a couple of fellow crime writers, Stella Duffy and Martine Bailey; Stella took the photo from the gallery on the first floor of the library room, while Martine and her husband Martin were dinner companions recently at St Hilda's. The volunteers who acted the parts of the suspects did a fnatastic job, and all in all it was a great occasion. The programme for the week-end as a whole was eclectic, and as well as Stella and her partner Shelley Silas, the roster of writers who took part included the acclaimed poet Wendy Cope and a number of those who have been writers in residence at the Library. Stella told me about her month as a writer in residence there, and it sounded like a marvellous experience.

There's a feelgood factor about Gladstone's Library which isn't solely due to the history and the presence of so many old, rare and wonderful books (Jamie, one of the interns, made my day on Sunday by showing me an original edition of The Strand featuring the first appearance of "A Scandal in Bohemia" and the other early Holmes short stories). The commitment and enthusiasm of the staff, including the Festival Director, Louisa Yates, really is a joy to behold. Some people at Gladstone's have had a very long and happy association with it, but I was impressed too by the very obvious love of the place on the part of the group of young people who are learning librarianship and other skills there.

The way the Library is contributing to the development of their careers came over very clearly when I talked to them, and equally I felt (as I often do) that those who argue that young people generally do not have the same passion for books and tradition as previous generations obviously don't meet the same young people that I do.  I wouldn't mind betting that the staff felt like collapsing in a heap once the festival came to an end, but they must be hugely cheered by the fact that all their efforts had such a successful outcome.
Posted by Martin Edwards