A Surprise for Christmas - a new British Library anthology

A Surprise for Christmas has just been published by the British Library, the latest of my anthologies for the Crime Classics series. Perhaps it's not really such a surprise that this collection has appeared. It's my fourth Christmas collection of mysteries, following Silent Nights, Crimson Snow, and The Christmas Card Crime, and all three of the previous Yuletide compilations feature near the top of my personal anthology list in terms of lifetime sales. Fingers crossed that the new book does as well. 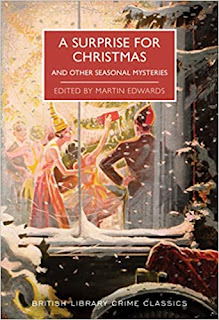 Sales aren't everything, though. They matter enormously to publishers, for obvious reasons, but for me it's always vital to try to make sure that these books are good enough to deserve some longevity. That is why I've always tried to produce anthologies that offer a distinctive personality and something more interesting than the same old, same old. For instance, I like to include some stories that will be unfamiliar to most crime fans. And I like to vary the mix, recognising that readers will have favourite stories - but personal faves vary from individual to individual.

The book takes its title from a story by Cyril Hare, a highly accomplished author of mysteries which were traditional in many ways yet generally had a distinctive and appealing tang. Hare was never a mega-seller, but he earned respect from fellow authors and readers and his work has lasted in a way that justifies his approach to his craft.

Agatha Christie, Ngaio Marsh, and John Dickson Carr also feature as contributors, so there is no shortage of big names, but there are also some much less renowned authors and stories. I should say, incidentally, that as with other BL anthologies, I've benefited from help and suggestions made by friends such as Jamie Sturgeon, Nigel Moss, and John Cooper. The result is, I hope, a book that will find its way into many a Christmas stocking.

I'm curious how you find all these rare stories. Do you consult crime story reference books or thumb through old magazines at the British Library? I also suppose it can be a hassle to find out who owns the copyright?

Already got my copy, Martin!

Ted, it's a long answer and perhaps I'll do a blog post in more detail, but briefly it's a combination of research and consulting experts in the field. The copyright issues - yes, though thankfully that is the BL's responsibility, not mine

Chrissie - thanks. Hope you enjoy it!

Had to search by ISBN on the US Amazon site because somebody put the title in as ASURPRISEFORCHRISTMAS:ANDOTHER ... weird!

I've just ordered a copy of this new anthology. I love these British Library crime classics and I think a bit of seasonal murder and mystery is the perfect way to spend a Christmas with a mince pie and a mulled wine or sloe gin. Happy Christmas to you and your family!

Looking forward to reading it!

Ted, thanks for searching for it! The vagaries of online listings are endless...

David, thanks very much for your comment. I do hope you enjoy this one. As ever, the contents are a mixed bag, a real assortment box in traditional style! And a very merry Christmas to you too.