The Lighthouse is a recent horror film, made in black and white by Robert Eggers, who also co-wrote the screenplay with his brother. Apparently the original spark for the story came from Edgar Allan Poe's final, unfinished story with the same title, but otherwise there is no resemblance between the two works. This is an unsettling film, full of ambiguities. Explanations for what's going on are in short supply, but although in some movies that matters a great deal, here it does not. To me, the ambiguous nature of the storyline is a plus. So is the setting - lighthouses and small islands have fascinated me since I was young, and the combination is irresistible.

The set-up is simple enough. It's the late nineteenth century, and a young man, Ephraim Winslow, arrives at a lighthouse on a remote, fog-blanketed island for a four-week stint as a 'wickie', assisting the veteran lighthouse keeper Thomas Wake. The two men are played respectively by Robert Pattinson and Willem Dafoe and both give superb performances. 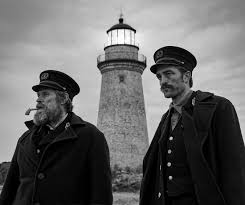 We soon learn that Ephraim's predecessor went mad, and we aren't in any doubt that Bad Stuff is destined to happen. I don't want to say too much about the detail of the storyline, but suffice to say that the lighthouse lamp, a mermaid, and a one-eyed gull all play key parts in the events that unfold. There's a hallucinatory quality to much of the filming, and the desolate, lonely location is marvellously atmospheric.

With a horror story of this kind, a writer may opt to give the satisfaction of an explanation of events, or leave things murky. Either method can work; everything depends on the skill with which the story is told. Much as I love rational detective stories with ingenious solutions, I'm also keen on strange, inexplicable stories such as those written by the great Robert Aickmann. The Lighthouse isn't exactly an Aickmann-type of story, but its strangeness is a large part of its appeal. I found it compelling.

‘The Lighthouse’ sounds right up my street. I always enjoy atmospheric supernatural tales that keep us guessing. Accounts of “real life” ghost sightings too.

The long-abandoned Point of Ayr lighthouse at Talacre, just down the road from my home, is reputed to be haunted by the ghost of a former keeper. And Leasowe Lighthouse on the Wirral, visited with other poets for a “poetry picnic” last year, felt decidedly spooky to me. I wrote a haibun about it titled ‘A Spirit Unbidden’.

Back with fiction, I enjoy Robert Aickman’s short stories – in fact it was you who suggested him to me some years ago. I also enjoyed your story ‘No Flowers’ in ‘The Mammoth Book of British Crime 11’, edited by Maxim Jakubowski, and wonder whether you might detour into the paranormal again from time to time?

Ah, Leasowe Lighthouse! I used to live close to it, in Moreton. And I know Talacre as well. On the subject of the paranormal, curiously enough I had an idea for a ghost story the other day. The new novel needs to take priority, but I'm pretty sure I'll do some more supernatural fiction in due course.