I was so sorry to learn yesterday of the death of Jill Paton Walsh. Jill was an accomplished author in several fields and her Knowledge of Angels was famously shortlisted for the Booker Prize having originally been self-published. Detective fiction fans appreciated her short series of novels set in Cambridge and featuring Imogen Quy, and she made a real splash when she completed Dorothy L. Sayers' Thrones, Dominations. Not content with that, she proceeded to publish three more books featuring Lord Peter Wimsey. 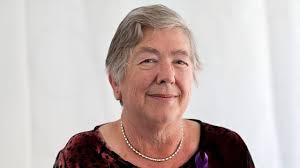 I first met Jill (and her late husband John Rowe Townsend) some years ago at the St Hilda's mystery conference. I'd previously enjoyed both an Imogen Quy and Thrones, Dominations. There are, of course, widely divergent views about 'completion' and 'continuation' novels featuring favourite detective characters. The test for me is simply this: how well is it done? Suffice to say that Thrones, Dominations is the book of this type that I admire more than any other. To follow in Sayers' footsteps is particularly daunting, but Jill turned a fragmentary manuscript into a coherent whole with great style.

Jill was a member of the Detection Club, though I hadn't seen her for some time at the point when I was working on Howdunit last year. A mutual friend told me that she was rather frail, and at first my instinct was not to trouble her for a contribution. However, I decided to drop her a line rather than send an email, and received a cheerful and extremely positive reply. She told me it was the first handwritten letter she'd received all year...

Various enjoyable telephone discussions followed (the editorial process with Howdunit was fascinating and certainly unique in my personal experience). The upshot was that Jill contributed a lovely piece, developing points she'd made in an article some years ago, called 'One Thing Leads to Another'. It was very much in the inspirational spirit of Howdunit and presumably it was her last published piece of work. It's sad that we've lost her, but her literary legacy is impressive and will endure. On a personal note, I cherish the memory of those conversations.

I'm sorry to read this; I discovered the Isobel Quy series after reading Thrones, Dominations and enjoyed them very much. Her Peter Wimsey books are very well done - generally I dislike
the whole idea of continuation novels but as a DLS fan I think she had an excellent touch

Sounds a worthwhile article. In my experience almost everything Jill ever said about mystery writing was equally applicable to fiction in general. She had a large sympathy in that regard.

I love your tips. I will be looking Jill's work up.