The first thing to say about last night's CWA Dagger awards was how slickly and efficiently the whole event was organised. It was really impressive. I know how stressful it can be to organise the evening even in normal times and when you're reliant on technology, there's an added level of uncertainty. But it all went without a hitch. Many congratulations to Chair Linda Stratmann, Secretary Dea Parkin, M.C. Barry Forshaw and techno-wizard Antony Johnston as well as the rest of the team. They did everyone proud. 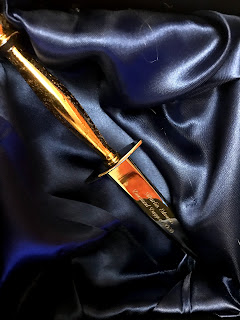 There's no doubt that to receive the Diamond Dagger is the greatest moment of my career as a writer (and it beats anything in my career as a lawyer, come to that). I was grateful that Ann Cleeves kindly agreed to present the Dagger virtually - when we recorded the presentation she made the point that there was a 'satisfying symmetry' about it, given that I presented her with the Diamond Dagger three years ago. The photo at the end of this post shows us with the actual Diamond Dagger, which is kept in a safe for most of the year, because it really is heavy with diamonds. Maybe I'll be allowed to touch it again at some future date!

As I said, there are particular reasons why this award is very special to me. First, when one looks at the list of previous recipients. It's a stellar group - P.D. James, John Le Carre, Ruth Rendell, Elmore Leonard, Ed McBain, Sara Paretsky, Michael Connolly, Reginald Hill, Ian Rankin, Val McDermid, Lee Child, Andrew Taylor, Ellis Peters, Eric Ambler - the list goes on. To join that exalted company is extraordinary.

And then there's the fact that the award is voted by one's fellow writers. Nominations come in from CWA members. They are then whittled down to a shortlist by a sub-committtee, and finally the CWA board votes on the shortlist. So quite an elaborate process. And perhaps I can share one anecdote about it from the late 90s.

At that time, I was phoned up by Reg Hill. He'd recently been awarded the Diamond Dagger and was on the CWA board. He'd been asked to form the shortlisting sub-committee, to ensure that standards were kept high. He said to me that he didn't really care for being on committees, but he'd like me to collaborate with him on choosing shortlists of suitable recipients. He said that, having received the award himself, he wanted to make sure that future recipients were of the right calibre and he explained in a very clear way what that meant. He felt talking it all through with me would work well and be fun for both of us. And he added that it was obviously too soon for me to be a candidate myself, but that one day, although not for a fair few years, he felt my time for the Diamond Dagger would come.

It was an invitation I couldn't refuse, and he was right - our conversations over the years were a lot of fun. Because he wasn't the sort of man who ever indulged in glib flattery, I was hugely touched by the fact he thought my writing was potentially good enough to qualify me one day for the Diamond Dagger, though I found it almost impossible to imagine that I'd be so lucky. And now it's actually happened. I like to think that Reg, who gave me a lot of encouragement over the years, would be pleased. And I'm truly happy to receive an accolade that once seemed so distant and improbable. 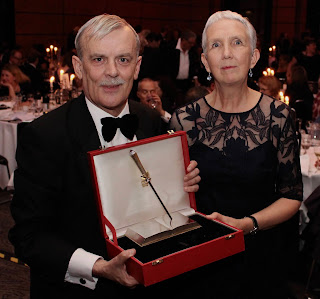 Huge congratulations Martin - the respect of one's peers has to be the highest accolade possible but your many fans will be delighted because we know it couldn't happen to a nicer person!

Thanks very much, Fiona. It's an incredibly happy experience, that's for sure.

Adding “techno-wizard” to my business card as we speak ;)

Congratulations, Martin! That is absolutely fantastic and I'm very happy for you.

Couldn’t have been awarded to a nicer guy, or to a better writer.

Congratulations, Martin! It is well deserved!

Many congratulations, Martin. This honour is well deserved, not only for your novels but also for your terrific work as the historian of crime fiction.

Gosh Martin, if that young lad who witnessed Miss Marple (AKA Margaret Rutherford) dropping in at Comberbach for the 1964 world premiere of ‘Murder Most Foul’ could have foreseen that CWA virtual awards ceremony the other night…

Huge Congratulations from Maureen and me on winning the Diamond Dagger.

As a keen crime fiction buff myself since reading ‘The Hound of the Baskervilles’ at school, and as an avid reader of your crime fiction, non-fiction, anthologies and blog, I’m delighted – though not in the least surprised! – that this ultimate accolade in the genre has gone to you.

You’ve done so much to promote crime fiction and ensure that great authors of the past are not forgotten too. You are truly deserving of this honour, Martin. And yes, I’m sure that Reg Hill would have been pleased indeed!

Well done Martin. You deserve it both on the count of your fiction and also the tremendous contribution you have made as historian of the Golden age. Also your promotion of crime writing to new audiences through your work on the British Library series.

You are nigh overdue for this great honor. Congratulations!

Many congratulations, Martin. This is a fantastic achievement.

Good on you, Martin!! Am so pleased and how lovely to get news like
this these days! Congratulations and see you, well sometime...
Katherine

Congratulations Martin. It is an honour well deserved. To be recognized by peers makes an award all the more special.