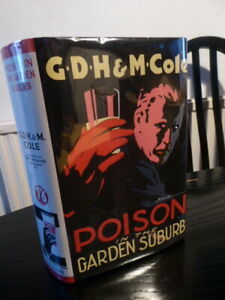 The detective novels of the husband and wife team GDH and Margaret Cole are rather a mixed bag. I have to say that I've been disappointed with quite a number of those I've read. It's always possible, however, that one may drop unlucky with a particular book, or even a number of them, so I thought I'd give the Coles another try. Their early (1929) detective novel Poison in the Garden Suburb received praise from Barzun and Taylor, so it seemed like a good option.

The story gets off to a lively, and occasionally witty, start. People gather at the Literary Institute of Medstead Garden Suburb to listen to a talk by a noted lecturer, but proceedings are interrupted by the collapse and sudden death of a nondescript bourgeois banker called Cayley, whose only claim to fame is that his young wife is extraordinarily beautiful (and not very bright: the authors clearly don't approve of her). The dead man has been poisoned with strychnine and the prime suspect is a young doctor called Shorthouse, whose behaviour is idiotic to put it mildly.

As a result of this drama, we're not told much about the talk itself, but its subject was eugenics. The Coles were leading lights in the Fabian Society (its fictional equivalent features in the novel as the Bureau for Left-Wing Information), which had a considerable enthusiasm for eugenics at one time. I wondered if Rachel Redford, one of the main characters and employed by the Bureau, was to some extent a fictional portrait of Margaret Cole herself. There are some nice bits of social comment in the early part of the book before we get rather bogged down in the murder investigation.

One of the official detectives, a gloomy superintendent, is pleasingly presented, but the key investigator is the Coles' series sleuth Henry Wilson, who at this stage of his career was operating as a private detective prior to returning to duty at Scotland Yard. I felt the story sagged in the middle, and the climactic excitement felt rather underwhelming, especially since I thought the identity of the murderer was fairly obvious from early on in the story (even though the culprit's true character was barely hinted at: I don't think this is a stellar example of fair play, at least in psychological terms). Overall, this is a novel with some very good ingredients made into a passably entertaining story. Nick Fuller reviewed the book a while ago and makes a number of good point as well as including fascinating contemporary reviews.