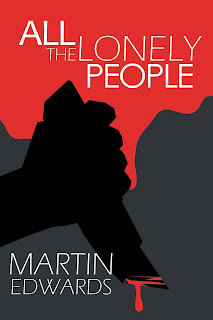 I find it hard - very hard - to believe, but this year marks the 30th anniversary of the publication of my first novel. Yes, Harry Devlin emerged way back in 1991, in All the Lonely People. In one sense, the appearance of that novel marked a culmination - I'd only ever had one career ambition, which was to publish a detective novel - but in many other respects it represented the start of something new, the beginning of my life as a published novelist. And it's a life I've enjoyed hugely ever since.

I'm absolutely thrilled that Acorn (also known as AUK Studios), the country's leading indie digital creator, is celebrating this anniversary by reissuing the seven Harry Devlin books I wrote in the 1990s with striking new cover artwork. The revamped books are available now, not only as ebooks but also in hardcover and paperback editions. They also include introductions from leading writers such as Val McDermid, Ann Cleeves, Andrew Taylor, Margaret Murphy, and Peter Lovesey.

All the Lonely People introduces Harry and he's soon in big trouble. His estranged wife Liz is murdered and he is the prime suspect. He wants to clear his name, and above all he wants to see justice done for Liz. My aim was to combine a gritty modern setting with a twisty plot in the Golden Age vein. Of course, it's no longer a modern story, but I hope it casts a little light on the way things were at the time.

The book did well for me. It earned terrific reviews in The Times (Marcel Berlins) and The Guardian (Matthew Coady) and also from Frances Fyfield, whose review said: 'More than adequate plotting and tremendous atmospherics...all in all a grand debut, well worth supporting. Buy it.' In later years I got to know both Marcel and Matthew, while Frankie Fyfield became a good friend (she also kindly wrote an intro for the reissue of the novel!). In those early days, though, the writing life was all very new to me and the warm words of these well-established commentators was a tremendous boost to morale.

So too was the news that the book had been nominated for the CWA's prize for the best first crime novel of the year, which has had various names over the years but which I tend to think of still as the CWA John Creasey Memorial Dagger. The winner was Walter Mosley and one of the great moments of my career came many years later in New York City, when I received an Edgar award on the same night that Walter was made a Grand Master of the MWA. Believe me, I never dreamed of that way back in 1991...

Many congrats Martin, 30 is a fab achievement and long may it continue. Here is to the next 30. xx

Thanks so much, Jane. I hope there may be a new Harry story one of these fine days!