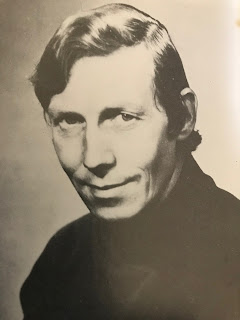 Martin Russell was one of the unsung but highly reliable British crime authors in the latter part of the twentieth century. He was born in 1934 and I learned, from a comment on this blog by Betty Telford, that he died following a bout of pneumonia in 2019. I've been hoping that someone who knew him personally would publish an obituary of him, since he's a writer who has always interested me. But even in his lifetime he was never high profile, and there has been no mention of his achievements following his death that I've been able to trace. Nor is there any photo that I can find on the internet - the picture above is taken from the jacket of one of his books. I think he deserves to be remembered. So although I never met him, I thought I would try, to an extent at least, to fill the gap.

Russell's books were published by Collins Crime Club, from his debut No Through Road in 1965 to Leisure Pursuit in 1993. He published one book under the name Mark Lester and another as by James Arney, both of which were published by Robert Hale (whether these were digressions or books that Collins didn't accept, I don't know,and they are quite elusive).

Russell was born in Kent and spent much of his life in and around Bromley. He worked there as a journalist and subsequently joined the Croydon Advertiser group, later retiring to write full-time. This shows how successful he was as a novelist in financial terms- his books were published in such diverse countries as Germany, Italy, Finland, Spain, and Japan. He'd turned to crime after failing to find a publisher for some comic novels that he wrote. He never married, but enjoyed playing squash and tennis as well as jogging. He was also a crossword fanatic.

He was well-regarded enough by his peers to be elected to membership of the Detection Club in 1979 and he was also involved with the CWA, editing the members' newsletter Red Herrings. But he'd faded from the scene by the time I became involved with the world of published crime writers, which is why our paths never crossed. I've talked to a few authors who remember him and it's clear that he was a likeable man, modest and retiring. My guess is that he lost enthusiasm for crime writing. Perhaps the well of ideas ran dry. Perhaps he was disappointed by a lack of recognition for the often striking ingenuity of his stories. For whatever reason, he didn't stay in touch with the crime writing world, and his Detection Club colleagues hadn't heard from him for many years prior to his death.

There has been regrettably little discussion of his writing apart from contemporary reviews. Reginald Hill wrote an essay about him for the first two editions of Twentieth Century Crime and Mystery Writers and when Reg was unavailable to update it, I wrote a new piece for the next two editions. Six years ago, Bob Cornwell invited him to contribute to the CADS questionnaire, but he declined pleasantly, pleading ill-health. So he was a man of mystery in more ways than one. But for anyone who enjoys twisty plots, the work of Martin Russell is well worth investigating.

Good to hear from you again, Peregrine

Thank you very much for obituary, which I was very pleased to see, of Martin Russell, my long-time editor on Surrey/South London newspsper Arts pages before he left journalism to write full time. We were very good frtiends and I went with him once on a very enjoyable day out with lunch at his publishers Collins when he (Martin) was signing cotract for another of his crime novels. His nephew rang me after Martin died to let me know that he (Martin) had developed pneumonia following an accident playing tennis.
The sport was one he was very keen about most of his life and you will know that one of his novels featured murderr on a tennis court! The plots of his stories were often ingenious and kept one wrapped till the final pages. R.I.P. M.R. my olld friend, from Betty Telford, Arts Journalist

MARTIN (EDWARDS - another Martin - so sorry - will you please correct the typos in my text that I have only just seen! oh dear...
I can't see how to get back to do it myself.mmmm. B.