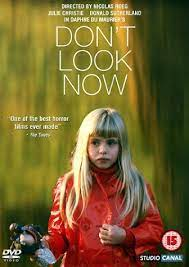 There are a lot of hopeless horror movies around, but there are also several masterpieces. My three all-time favourites are The Wicker Man, Rosemary's Baby and Don't Look Now (Midsommar, which has grown on me, is not too far behind, but I don't think it's quite in the same league, while The Shining didn't impress me quite as much as it did most people). I first watched Don't Look Now in the 70s and the shock ending made a great impact on me. It's an arty film, perhaps too self-consciously so, but a recent viewing confirmed that it hasn't lost its power.

The premise is simple and is based on a short story, rather than a novel, by Daphne du Maurier. Julie Christie and Donald Sutherland play a married couple, the Baxters, whose young daughter dies tragically in a drowning incident. The little girl was wearing a red coat at the time. The couple are deeply affected by their dreadful loss but some time later travel to Venice, where John Baxter is working on an ancient church. In Venice, they meet two elderly sisters, one of whom (superbly played by Hilary Mason) is blind and psychic and claims to be able to see the little girl. Meanwhile, a series of murders is being committed in the city...

The first time I watched the film, I found it quite bewildering. At that time, I'd never visited Venice, which makes a fantastic setting for the story. Venice is gorgeous, but it also has its macabre side, with all those bewildering twists and turns of the alleyways and the ever-present canals. Water is a central theme of the screenplay and the camera work is dazzling.

I've always been a Julie Christie fan and although the casting of Donald Sutherland must have seemed like a gamble, he is terrific too. This is a film that could easily have slipped into pretentiousness, but the performances are so effective that the risk is averted. The result is a haunting gem.

Martin, "Don't Look Now" is a brilliant film. The film derives from a story by Daphne du Maurier (who is somewhat overlooked at the moment), but her stories have provided the basis for some excellent films (and some duds), the former including: "Jamaica Inn", "Rebecca" (obvs) and "The Birds"; there was also a 1970s' BBC adaptation of "The Breakthrough", which freaked me out, even more so than "Don't Look Now". Happy days!

'The Breakthrough' isn't one I know at all, Michael. Interesting recommendation, thanks.