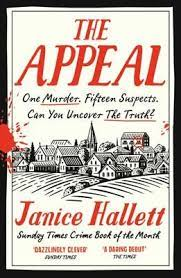 The Appeal is a debut crime novel by Janice Hallett, a screenwriter and playwright with a lifelong love of amateur dramatics that shines through. The book has had enormous success and I must say right away that I really enjoyed reading it. The story kept me gripped throughout and I expect that it will feature strongly in the award nominations in due course. It certainly deserves to do so.

A number of reviews and endorsements have hailed the book's originality. For me, the originality lies in the treatment of the material, since the structure resembles that of two detective novels which appeared in that landmark year 1930. The epistolary form is strongly reminiscent of The Documents in the Case, which I believe is Dorothy L. Sayers' most under-rated novel, the result of a one-off collaboration with Robert Eustace. In addition, there is a 'whowasdunin' element of the kind which seems to have originated with Anthony Berkeley's Murder in the Basement. But Hallett gives these concepts a very effective makeover. The documents in this case are nearly all emails (as in Joseph Knox's True Crime Story) while Hallett cleverly presents three connected mysteries. First, who has been killed? Second, who has been convicted of the murder? Third, who is really guilty?

At the outset, two keen young lawyers are tasked by their boss (Roderick Tanner QC) with looking at a hefty bundle of documents without preconceptions. They find that they are following the activities of The Fairway Players, an am dram group who are about to put on Miller's All My Sons. Those activities are complicated by the fact that Martin Hayward, wealthy chair of the group, has a grand-daughter called Poppy who at the age of 2 is suffering from cancer. An appeal is launched on Poppy's behalf, but the ensuing financial shenanigans raise early questions about the motives of the Hayward family, whose behaviour is not quite what one would expect, to say the least. There are plenty of funny moments, especially in the behaviour of Issy, a nurse and evident fantasist who latches on to Sam Greenwood, a nurse who has recently returned to the UK from Africa. And there are occasional touches of darkness too.

There are numerous plot twists, some of them foreseeable, some of them less so. They vary in effectiveness, but there is one trick (concerning an invented character) that I should have spotted, yet Janice Hallett fooled me completely and splendidly. Jim Noy has reviewed the book with his customary incisiveness at The Invisible Event and I think his assessment is fair and accurate. As Jim says, there is a vast cast of characters, including two men in their 30s called Kel and Kev respectively, and all this can be a bit confusing. However, the voices of the lead characters are pleasingly distinctive. The am dram background seems to me to be extremely well done.

I was much less convinced by the legal element, which clearly didn't interest the author very much (though Femi and Charlotte are entertaining amateur sleuths). There's a lack of coherence and clarity as to whether the lawyers are barristers or solicitors. Tanner is a QC but also appears to be a senior partner in a solicitors' firm. There's a suggestion that Femi and Charlotte are 'articled clerks', aka trainee solicitors, although as Jim indicates, most people will assume they are pupil barristers. So who is actually handling the court case? Most readers won't care about this, and an author can be forgiven for vagueness about details. It's common to find misconceptions about the law and legal life in novels - I can think of at least one terrific bestselling writer who has stumbled into minor errors in recent times - but a book as entertaining as this deserved more editorial work to make the set-up seem more credible. It could have been done easily.

But let me not dwell on legal quibbles. The Sunday Times has described Hallett as 'a modern Agatha Christie', and it's good to see Agatha still regularly name-checked when crime writers are praised. Hallett is a very different writer but her ingenuity is admirable and her sense of humour really appealing. I very much look forward to reading her next book.

Thank you for this recommendation, I shall take it and look forward to reading this book. Ihad not come across Janice Hallett