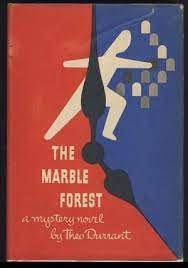 Theo Durrant was a Californian double murderer whose name was used as a pseudonym by members of the northern chapter of the Mystery Writers of America when they wrote a collaborative crime novel.  Twelve authors were involved in the writing of The Marble Forest, with the lead taken by Anthony Boucher, the man who gave his name to Bouchercon and who was also a legendary critic and a talented exponent of the classic mystery.

The Marble Forest is a book in the tradition of Detection Club collaborations such as The Floating Admiral, but the plotting is rather tighter than you tend to expect in a novel written by a dozen different people. I understand from Jeffrey Marks' biography of Boucher that Boucher took the lead, writing detailed notes so that each contributor was working to a definite plan.

There is a whodunit element in the novel, but essentially it's a high-tension clock-race story. A doctor is told that his young daughter Midge has been kidnapped and buried in a coffin. He needs to find her before the air supply runs out. As he conducts his search in a dark cemetery - the 'marble forest' of the title- we learn, through a series of flashbacks, about the people who have cause to wish him harm.

This is a pretty good thriller, published in 1951 and filmed seven years later as Macabre. The contributors included some obscure figures and a few who were very highly regarded in their day, including Lenore Glen Offord and Darwin Teilhet. Sadly, Virginia Rath died - in her mid-forties - before publication. I think their interesting, offbeat collective effort deserves to be better known.