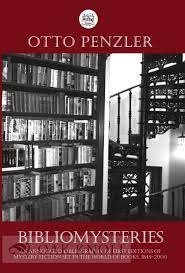 The term 'bibliomystery' appeals to me. It's a term that has been popularized by Otto Penzler, the founder of the Mysterious Press and owner of the wonderful Mysterious Bookshop in New York City. I'm not sure if Otto coined the term itself, but no question, he's done more than anyone to promote the reading and writing of bibliomysteries. Not content with editing an impressive number of high quality anthologies, Otto has produced book-related books of his own such as the fascinating Mysterious Obsessions (which I'll talk about in a future blog post) and also a slim volume called....Bibliomysteries.

This book is described as 'an annotated bibliography of first editions of mystery fiction set in the world of books, 1849-2000'. It is also a gorgeous book, because it includes lots of full-colour illustrations of rare dust jackets, ranging from The Library of Death by Ronald S.L. Harding (never heard of it before, but a fab title and a fab jacket) to the equally obscure Inspector Wilkins Reads the Proofs, by Murray Thomas, definitely the sort of title you never encounter in modern fiction.

So what exactly is a bibliomystery? Otto acknowledges in his intro that it's a vague term - the same can be said for 'crime fiction' itself - but in essence, these are mysteries set in the world of books. So Nicholas Blake's End of Chapter, with a publishing background, is a natural for inclusion in this volume, but so is Blake's The Private Wound, which has a protagonist who is a novelist. I don't know if my own Lake District Mysteries, which feature Marc Amos the bookseller as a recurring member of the supporting cast of characters, count as 'bibliomysteries'; some don't, but I guess The Serpent Pool would.

I've been responsible for an anthology of bibliomysteries of my own, Murder by the Book, which was fun to compile, but there's no doubt that in this field Otto sets the gold standard. By commissioning new bibliomysteries regularly, he is keeping a lovely tradition very much alive. Check out this listing which includes some wonderful authors, many of them real favourites of mine. And yes, I'm very pleased to be among them; writing The Traitor for this list was truly pleasurable, and I'd like to write more about my 'book detective' Benny Morgan one of these days. As for Bibliomysteries, it would make a handsome gift for any bibliophile.