Forgotten Book - One is One 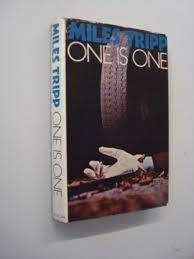 Miles Tripp is an author who has intrigued me for a long time. His writing was admired by Len Deighton and Julian Symons (who mentioned him in Bloody Murder) and you can't get much better judges than those two, yet he faded into obscurity even while he was still writing, and I've not found many people who have read his books. Reading his 1968 stand-alone One is One reminded me of the quality of his writing, but it's a book which also supplies some clues as to why he never really made it big as a crime writer, despite publishing no fewer than 37 novels, including a series featuring the private eye John Samson.

The early pages of One is One chart a marriage that is seemingly on the rocks. Mark Donaldson is a businessman married to the gorgeous Marie, but her extravagance is driving him into debt. He conceives a wild plan, connected to Marie's potential inheritance, which involves killing an old man in France. At first it seems that he has got away with murder, but there is a witness to his crime...

I found this book extremely readable,while Tripp's insights into character are sometimes compelling. What is more, the story is unusual. It begins as a relatively straightforward variation on the 'inverted mystery' theme and develops into something much more elaborate. There are several surprise twists, some of them involving impersonation.

I haven't been able to find any discussion about this book, or any significant reviews, and I imagine Tripp must have been disappointed that the novel seems to have made little impression. But there are reasons for this. In a nutshell, Tripp was too unorthodox for his own good. We start by following Mark's activities, but the viewpoint keeps shifting and there are a number of flashbacks. I'm not convinced that Tripp found the best way of structuring a rather interesting plot. His chosen method doesn't quite achieve the necessary suspense, and feels a bit disjointed. This is a pity, because he has some interesting things to say about relationships, in particular those involving mutual dependence. All too often, I've found myself frustrated by the way he handled his material. But he could write very well indeed, and his novels, despite their flaws, have an admirable ambition.