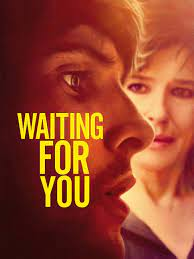 'Slow-burning' is an ambiguous, double-edged description. It can be shorthand for tedious. But it can also indicate a work of subtlety and sophistication. Waiting for You, directed by Charles Garrad, is a film which is definitely a slow burn, and although it's no masterpiece, it's well-made with a decent cast. As a rule, I'm not keen on films that lack pace, but I found this one eminently watchable, even though it's low-key from start to finish.

Colin Morgan plays Paul, a young man who works in Waterstone's. At the start of the film, his father dies, leaving him to wonder if secrets from the past - the old man was a soldier in Aden - help to explain why his mother (Clare Holman, best known as the forensic pathologist in Inspector Morse and Lewis) has been left penniless.

To his mother's dismay, Paul travels to France to follow an enigmatic lead and pretends to be an architectural student in order to gain access to a house in a remote part of southern France which is owned by the daughter of the man who was the commanding officer in Aden. She is played by Fanny Ardant, whose mysterious, almost menacing behaviour is intriguing. What is hidden in her father's old study, which she insists on keeping locked?

Gradually, those past secrets are revealed. In a sense, this is a mystery film, but it's also to some extent a coming-of-age drama, as Paul becomes involved with a young French woman as well as learning more about his father's past. The title comes from a Billy Stewart song, 'Sitting in the Park', recorded among others by Georgie Fame. When you watch this film, you do have to do a bit of waiting, but I thought it was worth my while.