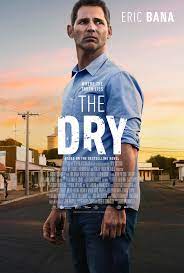 Jane Harper's debut novel The Dry won a CWA Gold Dagger and has been much praised for its evocation of the Australian outback during a drought. It's interesting to note that Jane Harper was actually born in Manchester, better known for rain than the lack of it, but she moved to Australia as a child, and after a number of years back in England, returned there some years ago. So she knows the country very well indeed.

The recent film of her novel, directed by Robert Connolly, captures the landscape nicely and handles numerous flashback scenes pretty well. Essentially this is a story about two mysteries, one from the distant past, one in the present. The connecting link is detective Aaron Falk, who returns to his home town after many years of absence.

Falk (well played by Eric Bana) goes back to attend the funeral of an old friend, Luke, after a devastating domestic tragedy. Luke is presumed to have killed his wife and child and then committed suicide. But the dead man's parents can't believe he was capable of such an atrocity and Aaron feels compelled to investigate.

A complication is that Aaron and Luke were associated with the death of a female friend when they were all teenagers, and it soon becomes clear that some of the locals don't want Aaron back in town. But he stays on, teaming up with a likeable local cop, and turning over plenty of stones as he searches for the truth and a sort of personal redemption. The film moves rather slowly at times, but overall it's a rewarding story, well-written and well acted.