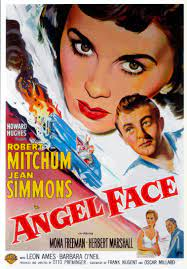 Angel Face is an interesting and slightly unorthodox film noir, directed by Otto Preminger and starring Robert Mitchum and Jean Simmons. It's one of those films which wasn't especially successful on first release, but time has seen a generally favourable re-evaluation. This is largely due, I think, to the fact that the characters aren't simple ciphers. Even the glamorous femme fatale has her good points.

Mitchum plays Frank Jessup, a racing driver who now drives an ambulance. He and his pal are called out to the mansion of the wealthy Tremayne family, where Mrs Catherine Tremayne has suffered (not fatally) from gas poisoning. Frank meets Catherine's step-daughter, Diane (Simmons), who immediately takes a shine to him.

Diane pursues Frank, prompting his break-up with his girlfriend Mary (Mona Wilton) and gets him a job as the family chauffeur. They begin an affair, but even Frank, who isn't the sharpest knife in the block, suspects that Diane isn't to be trusted. And then death comes to the Tremayne family...

There's a murder trial and a shock finale, but really the plot is nothing special. What makes this film stand out is the direction and the performances of the lead actors. Simmons is especially good, giving some depth to her portrayal of an impulsive young woman whose demons get the better of her. Mitchum's character is an average guy. We don't entirely sympathise with him, but he's not a bad guy. Unfortunately, his misjudgements lead to disastrous consequences.