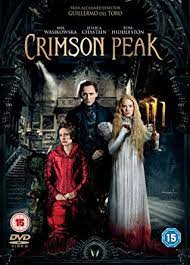 Crimson Peak is a film I find far from easy to judge fairly. The director is the Oscar-winning Guillermo del Toro, whose The Shape of Water I found odd but fascinating (I watched it on a long plane trip, not the ideal way to watch a thought-provoking movie, but it has definitely stayed in my memory). He has a gift for the visual, and is renowned for giving a gorgeous sheen to the grotesque. There's plenty of that in Crimson Peak.

In the late nineteenth century, a young American girl, Edith Cushing (the surname may be a nod to that fine horror actor Peter Cushing) sees the ghost of her dead mother, who warns her to beware of 'Crimson Peak'. Fast forward to 1901, and Edith is a grown woman, played by Mia Wassikowska. She encounters an English baronet, Sir Thomas Sharpe (Tom Hiddleston), who is visiting the States in the company of his sister Lucille (Jessican Chastain). Sharpe fails to persuade Edith's wealthy father to fund his plans to restore the fortunes of the clay mines on his family estate, but he and Edith hit it off. Her father disapproves, but is savagely murdered. In a repellent and frankly ridiculous scene, Edith is bullied into identifying her father's disfigured corpse.

Edith duly marries Sharpe, much to the dismay of her admirer Alan (Charlie Hunnam) and the couple, along with Lucille, head for the Sharpe estate, Allerdale Hall in Cumberland. Cumberland is, as one reviewer, said, portrayed rather like a desolate prairie. The old house is a sinister, decaying version of  a Disney castle, and red clay oozes symbolically from the ground - yeah, you see that all the time in the Lake District. Realistic it ain't, and for me this tended to diminish the impact of much of the horrors that follow.

Because del Toro is a gifted film-maker, Crimson Peak is worth watching. Unfortunately, as co-writer of the screenplay, he has to take some of the blame for the feebleness of much of the dialogue. There's too much silliness for the story to be taken seriously, and even though I definitely believe one should make generous allowances for excess and over the top melodrama in a Gothic storyline, in this case the overwhelming weight of the absurdities did diminish my enjoyment.