Forgotten Book - The Devil and the C.I.D. 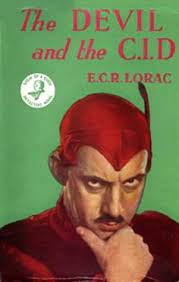 E.C. R. Lorac published The Devil and the C.I.D. in 1938, the year after her election to membership of the Detection Club, and at a point in her career where her confidence was high. Her two previous books, Bats in the Belfry and These Names Make Clues, are among her best. The Devil and the C.I.D. is, I think, a great title and the opening of the story is truly memorable.

Our old chum Inspector Macdonald is driving through central London in a 'pea-soup' fog, atmospherically described. He leaves his car briefly to help a woman in distress and unwisely leaves his car unlocked. When he gets back, there is a corpse in the back of the car. What is more, the deceased is dressed up as Mephistopheles, and has been murdered. Poor old Macdonald is embarrassed into solving the crime.

This isn't an entirely orthodox detective mystery and I don't want to say too much about the sequence of events that unfolds. There's an interesting mix of characters and this is one of those Lorac books where we are given a clear insight into Macdonald's essential humanity. He is a pleasing creation, and by no means as anonymous or humdrum as a number of other Scotland Yard men from the Golden Age, even if he's neither an Alleyn nor an Appleby.

One of the reasons I find Lorac's books appealing is that she was equally good at conveying urban and rural settings. She doesn't over-indulge in description, but we get a picture of London in this book, as well as in several others she wrote in the mid to late 30s. A few years later, she was writing quite lyrically about Lunesdale in Lancashire, a very different part of the world, with equal authority.

Labels: E.C.R. Lorac, Inspector Macdonald, The Devil and the C.I.D.

It's a pity that even a relatively recent reprint of this book is now very scarce, and expensive when found. We'll just have to hope for a British Library version, I suppose...

Speaking of reprints, I notice that somebody on EBay is offering an ebook version of several of her works (including Two-Way Murder) claiming that they are out of copyright. Can that be true?

Are we to understand that it will soon be reprinted as part of the BLCC series? I'm not much of a Lorac fan but the premise of this book is extremely and teasingly intriguing.

Jonathan, as far as I know, all Lorac's work is still in copyright. Certainly in the UK>

Xavier, I'm sure there will be more Loracs in the series, because they are so popular. But I don't know which titles may appear at present.