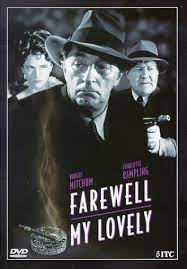 The 1975 version of Farewell My Lovely, based on Raymond Chandler's novel, is widely acclaimed. The first time I saw it, many years ago, I was underwhelmed, but I decided to give it another try and I'm glad I did. Second time around, I was more impressed by Robert Mitchum's interpretation of Philip Marlowe. Originally I felt he was too old for the part and not quite suited to it anyway. On reflection, I think he does a better job than I realised.

Perhaps I was simply in the right mood for the film this time. Mood and atmosphere are extremely important to the film (which is set in 1941) and the director Dick Richards did a good job on that score. Speaking of scores, David Shire's music is also well-suited to the film. The screenplay by David Zelag Goodman (whose other credits include The Eyes of Laura Mars) avoids falling into the trap of pastiche.

Quite apart from Mitchum, the cast is very strong. Moose Malloy, the huge bank robber who is crazy about a missing woman called Velma, and hires Marlowe to find her, can't have been easy to cast, but Jack O'Halloran, a former boxer whose first film role this was, does a great job. The famously sultry Charlotte Rampling is good as Helen Grayle, while Sylvia Miles makes the most of a smaller part, the alcoholic Jessie Florian: her performance earned her an Oscar nomination and deservedly so. Fascinatingly, Judge Grayle is played by the legendary hardboiled writer Jim Thompson. There's even a part for the young Sylvester Stallone.

This film isn't in the same league as Polanski's Chinatown, which was released a year earlier, but even though it lacks originality, I now think it's very effective entertainment. As with books, some films definitely improve on a second look.

I love Mitchum's performance. An ageing tired world-weary Marlowe. Exactly how I'd imagine Marlowe would have been in 1975.

Yes, he is very good in this one

I know it is sacrilege, but this is my favorite Marlowe movie.

I might have thought it sacrilege at one time - now after another viewing, I'm not so sure!